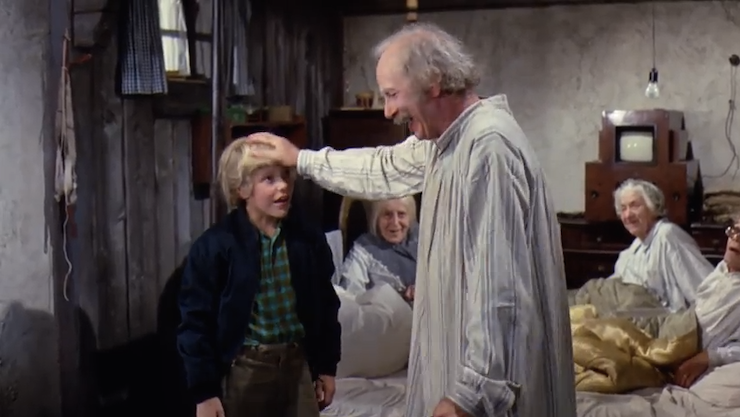 So last night Willy Wonka and the Chocolate Factory was on TV. I decided to watch a bit of it and live out some nostalgia. But then……

Holy shit!! This movie is as weird as hell!!!

I do not remember this thing being so bizarre and really…well……bizarre.

But the worst, strangest, and most completely surreal moment of the entire movie is when Charlie Bucket won the Golden Ticket and instead of taking his mother who worked day and night to feed his fat face, nor his grandmother who also had to work in her oldish age. Nope. Charlie decided to take Grandpa Joe; a ~55 year old man who claims to be bedridden for 25 years, making him ~30 when he decided not to move anymore, and is a complete deadbeat loser who has done nothing but suck at the teat of his family. Yeah, Charlie tapped Grandpa Joe for this task. And as we all know, Grandpa Joe jumps out of bed, showing everyone that the last 25 years he was a faker. This is sort of like folding the laundry poorly on purpose so your wife doesn’t ask you to do it anymore, but on a much much much more grand scale that spans a quarter of a century. Grandpa Joe is seriously one of the worst people in the children’s lit history, yet what makes this the most bizarre thing is that Joe is not treated as such.

Seriously, this movie is not only not appropriate for kids, it really isn’t appropriate for adults as well. This movie gave me an eerie feeling the entire time and some nightmares to boot. Rated PG? Should be rated TITSCUOMEAIMMFW; This Is The Strangest Creepy Utterly Oddest Movie Ever And It Makes Me Feel Weird.