Who would have thought a lifetime west coaster like myself would find a show about pretentious shallow east coast urbanites so appealing? Well, apparently not me until I started watching it in reruns on my go-to network, the O channel. It is a great mix of silliness, heart, and some surprisingly interesting drama. Even though the end leaves a lot to be desired, sit-coms typically don’t rely on solid finales, as compared to dramas. Spoiler alert: two of the four people in the picture play a gay character. But which ones…….

There has never been a stronger ensemble of inanity and sillariousness than Monty Python. It was truly the first popular comedy team that danced on the fine line of the sophisticated and the ridiculous. Just watch the skit of Arthur ‘Two Sheds’ Jackson and you will exactly know what I mean. So why is this not ranked higher? C’mon now, I am not THAT much of a nerd. 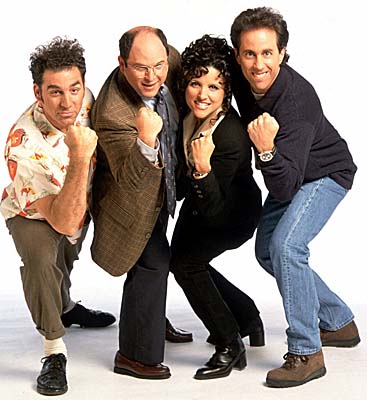 I know, I know. How can a child of the 80’s/90’s not rank this higher. Well, there is no doubt it is extremely funny and timeless. I have probably seen every episode literally 8+ times and it still remains somewhat fresh. The problem is twofold: 1) the show got much worse when Susan died (I think Larry David was not in on every show in later episodes as well). Whenever a main player dies in a comedy, there is a sort of pall that envelopes the show. The characters don’t seem as funny and the aura is not as light. 2) The ending was awful! Anyway, stop your griping! It made the top 10 at least. 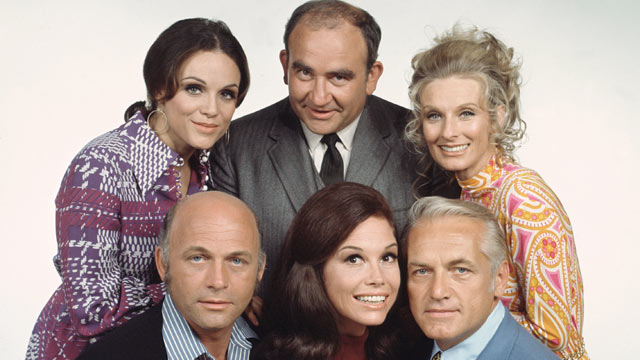 When I was a kid, I watched this show all the time on syndication. It was probably the first show I saw every episode, in order, all the way to the end. This show was just good natured and had a lot of heart, without being sappy. Mary Richards was a 30+ single woman living alone in the city (somewhat novel for it’s time), never got married, and never really centered her life on getting married. That’s pretty cool, especially for the 70’s. Also Ted Knight was awesome. And for you Seinfeld fans, check out the ending on this show. That is the way it is done.

Every time this show is on TV, I watch it. And every time I laugh at Robert, Raymond, Raybert, Frank, Marie, etc. I know the joke and I still laugh. This may be due to the fact I could be slow in the head, or maybe it is that funny. Regardless, this show portrays family life in an eerily realistic way. There is tension all the time between all the characters, there is a lot of yelling, and tons of negativity; and that is the true essence of good humor. Also a family show that’s not about the kids…..I’ll buy that for a dollar! 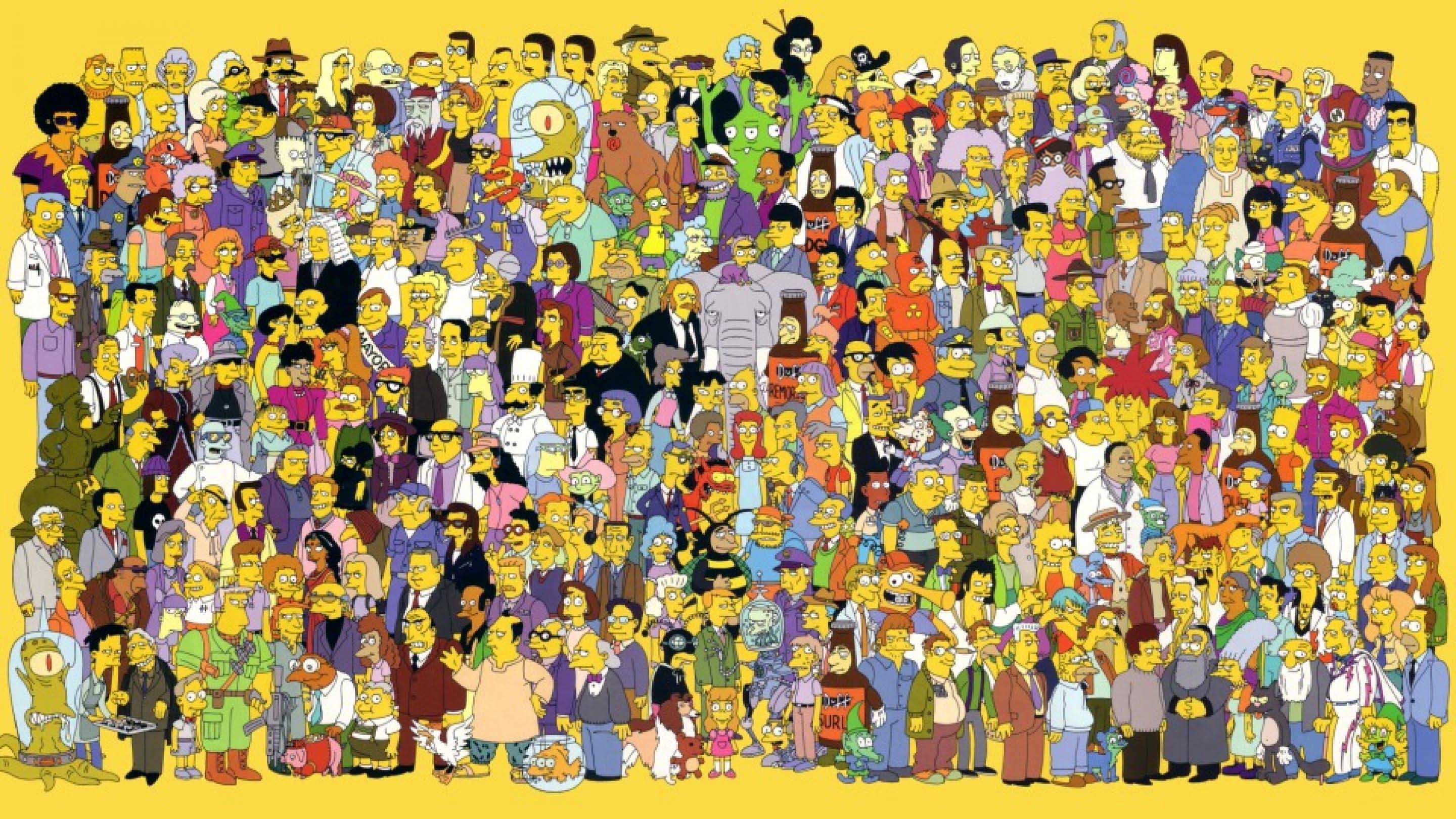 Now let me make myself clear about this ranking: The Simpsons seasons 1-8 are the best piece of tv comedy ever! This was the landmark show of my time as a teen, I think I stole every funny idea I ever had from this show (so did South Park and Family Guy). This show is the Steve Allen of shows. And you think it may be dated? Pshaw my friend! I have recently re watched many of the older episodes and guess what? Well….guess what? Not only do those episodes stand up in the face of time, they pull out their cock and slap time right in the face with it. But alas the same thing cannot be said for seasons 9-nth. In order to rank a show, you don’t get to select the season you like and go from there, you have to rank the entire package. And seasons 1-8 only make up around 30% of the show. This drop-off is mostly due to the main talent (aka: the writers) leaving and going on for bigger things. Some is due to the fact that Homer is not just dumb, but insane and hateful. Some is in part due to the death of Maude (see the Seinfeld write up). Anyway, 5 seems like a nice spot for it. Have you ever seen this show? Well, have you? I bet not. And if not, watch it now! IT is way better than this post. The IT Crowd is a British show that captures some of what Office Space did in the late 90’s and pushed it to another, more English, level. Anyone who works a 9-5 in an office can relate, but it is just much more than a work sit-com. It’s just funny, plain and simple. There is no other way of putting it. It’s smart, silly, not vulgar, and has a batting average of hilarity waaaay above almost every other show on this list. So why only #4? Well, only 24 episodes….that gives you that high average but really…..only 24? I used to hate Tina Fey. I found her smug and off-putting. This was mainly based on her SNL news pieces. I still maintain they were not funny, but I will not maintain my dislike for her. Yes, Liz Lemon is my #1 character crush. This show is so smart, witty, dense with humor, and yet laced with a sense of humanity and kindness, you cannot rank this show any worse than 4. From the Rural Juror to Janis Jomp-Jomp to the episode ‘It’s Never to Late for Now’ (maybe the greatest sitcom episode ever) to the completely non-sexual but love-filled relationship between Jack and Liz, this is the greatest major network sitcom that ever was created.

2. Flight of the Conchords

I believe New Zealand is a land enchanted by elves, dragons, magic, and all things that are good (at least since the One Ring was thrown in the fire whence it was made). Jermaine and Brett further proves this case with their unique blend of self-effacing humor, dry wit, and oh-so-clever musical interludes. Although only lasting 2 seasons, there is not another show than makes me truly LOL as much as the Conchords. However I don’t just simply laugh with the show, I also feel for the guys. There is a latent tone of loneliness and sadness in the show. It certainly doesn’t dominate the motif of the production, but that hint of melancholy shapes all the characters and makes the show that much more…..well more. Just watch this song, Carol Brown. This epitomizes their humor.

New Zealand’s 4th most popular guitar-based digi-bongo acapella-rap-funk-comedy folk duo? I would have to put them at least at 2.

South Park has recevied a reputation of being just a vulgar, immature, potty-humor show with no real substance. I guess if you haven’t fully seen any of the episodes, I can see why you would think that. But that would be so far from the truth, I would have to say ‘Shut you fuckin’ face uncle fucker……’.

I am not sure if there is a more important satire in TV history. The biting social commentary, the humane insights they have on serious issues, the scathing attacks they have on the holier-than-though in modern day times, the references to pop culture, this show has an intelligence to it that far outweighs the fame (or infamy) projected on it by it’s detractors.

To be fair, not every epiosde of it is a diamond. Remember the Snood? Remember the Great Expectations episode? There are many others that certainly swing and miss, but that is unavoidable for a show that has been on for 20+ years. However when they hit a home run, it is not only a round tripper, it busts the lights ala Roy Hobbs. I feel when I watch the show, Trey and Matt have picked my brain and put on screen a political slant or social view that not only that I laugh at, I completely agree with. They handle their underlying message with a compassion and wisdom that makes me feel….well….better about the world.

Then I see Cartman shit in his mom’s face and I laugh.