I’m going to come out and say it; I am so tired of the panda’s act.

Just look at the picture, he is laughing at us.

They get so much attention from us humans it is ridiculous. From being put on logos, to creating cartoons where they know kung fu, to the infamous ‘panda-cam’, pandas are all littered across our pop culture.

How can pro wrestling live with itself knowing this fluffy fat panda is now the symbol of their organization. I’m sure Vince McMahon is rolling in his grave.

Look how smug that damn panda looks…eating my chow mein. Lucky for you my anger can’t be too deep, your food is delicious. 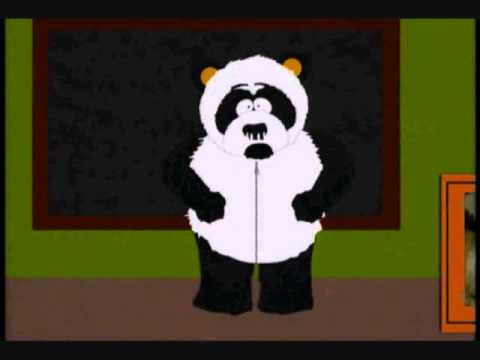 It was such a lame representation of an issue I hold dear, it was exiled to the Island of Misfit Mascots. I love Mr. Rogers, but this was just weird. An alien panda fro the planet Purple? C’mon Fred, even as a 4 year old I knew that was not a reasonable character in the Neighbor of Make-Believe. And you had an orphan tiger living in a clock that I was willing to accept!

As you can see, the panda is close to deified in our culture. And how does he/she repay us?

By being soooo annoying.

We as humans are the only species on earth that care about other animals and their existence. But I swear these pandas want to be extinct.

I am ready to distance myself from the panda and all panda-related propaganda. We need to pay more attention to the other black and white critters of the animal kingdom such as the zebra, the penguin, the albino tiger, the dalmatian, and the black-and-white version of the platypus. Maybe these animals will show more appreciation and less recalcitrance towards our good will.