What’s a better time to reminisce about all the best toys we have owned than Christmas time. Tis the season!!! So to start off this list, let’s go with a classic; Mr. Potato Head. Now over the years there have been many iterations of Mr. Head, but the one pictured here is the one I owned. I am really not sure what you are supposed to do with this guy. I mean you put some stuff on him and……that’s about it. Yeah, it is silly that this guy even exists. I mean it is potato……with a hat……and the formal moniker of ‘mister’.

Oh yeah, the Big Wheel. When I was 5, I was such a badass on this thing. I was riding around the neighborhood, hot blonde in one arm, bottle of Everclear in the other. I absolutely dominated the old 85715 back in the 70’s. And why? Because of my goddamn Big Wheel, that’s why!! Teh Big Wheel was the main form of transportation for many a child back in my day. But it also exists today in pretty much the same form! A true classic toy.

I am not sure why this one made the list. I mean it is just a floppy coil. I never got it to work. In fact there were no stairs in my house, so the purpose of the Slinky is still sort of a mystery to me. I guess it is here because the Slinky is a classic toy, although not really sure why. Also I couldn’t think of another toy.

Now here is blast from the past. Playmobils were the answer to the brand new action figure crazy of the late 60’s. However instead of making figures into exciting and famous people, the creators decided to just simply make figures into regular things with a sort of stylized minimalist look. I really liked these things as a kid. Not everything had to be He-Man or GI Joe. There is always room for simplicity. Also the look of the figures were pretty endearing to mine eye.

Going to a friend’s kid birthday party is the worst!! Other than the fact that there will be little kids running around, you never have any idea what to buy their snot-nosed freak. Well, no need to worry no more!! Just do what I do and simply purchase a big bag of green army men. They are timeless, fun for all ages, and most importantly cheap. I think everyone from just about every generation owned a bagful of these green army men. And of the fun to have. You can hide them strategically around the house waiting to attack at a moment’s notice. You can have a simple all-out WWIII in your bedroom if you like. Or you can melt them with a magnifying glass like a psycho. Either way, green army men are pretty cool. Well, except for that metal detector guy.

Now one would think from the outside that Nerf is just simply foam. But wait….there is more. Nerf balls, Nerf hoops, Nerf guns, Nerf anything is great stuff. What Nerf did a great job of is marketing their product into different type of games as well as evolving with the times. The toys products they have now are way more extreme and ‘rad’ than they were when I was a lad. But if I was forced to go with one Nerf product, I would go with the Nerf football. Light enough to easily catch, heavy enough to throw far, and doesn’t go flat when it lands in the cactus.

What young boy doesn’t love cars? They are sleek, fast, and just overall really cool. And who does the coolest of the cool car designs? Well Hot Wheels of course! Well, maybe Matchbox, but they are like the same thing to me. What was also great about these toys is that they are so cheap!! They were like 2 for a $1 back in the day (even now, they are far from pricey), so your parents would be willing to buy you a ton of these little hot rods. You could amass a huge collection of some of the most exotic mini-cars in the world without breaking the parent’s purse strings. Also these little cars are free from franchise ties, meaning they can appear in all sorts of scenarios. Playing Barbie? Finding a Matchbox car in the mix is not out of line. Playing Star Wars? A Hot Wheels Ferrari may find its way in there. Playing He-Man? Why not have Skelator being attacked by a gaggle of tiny little metal cars. Hot Wheels just work for all occasions.

No toy list can be complete without the original Star Wars action figures from the late 1970’s to the early 1980’s. Kenner, after a more prominent at the time plastic toy maker refused to bend the knee to Lucas (and immediately went under 2 years later), has made some of the most iconic and valuable toys in consumer history. The first thing Kenner got right is making their faces detailed. There was a sacrifice for this; a different mold and way of piecing the head together with the body made some of the movements restricted, but the end result was a figure that looked very much like what it was going for (at least for the day). And this kind of attention to detail translated to big profits. I mean BIIIIIGGGG profits. This link to a popular movie franchise revolutionized the toy industry forever. Even Kenner, or Lucas for that matter, had no idea how big this would be. They started off only making about 12 characters. That quickly grew to…well…pretty much every character that got even an ounce of screen time. Hell, even Snaggletooth got a figure, and no one knows who that guy is outside the toy. Anyway, I loved these guys and I had sooooo many of them it was insane. By the way, think yours are worth something? Yeah, probably not. Out of the box, they are at most $10-$20, if in mint! And I would bet you a New York Steak yours are not mint. I know mine are sure not. 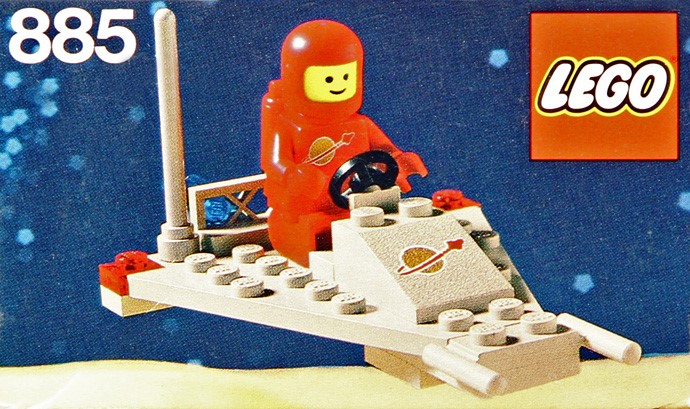 Ahhh Legos, the most classic of classic building block toys ever. Sure, you had your Erector Set. Yes, you had your Tinker Toys. And even some had those Lincoln Logs. But nothing beats Legos. Pieces too easy to swallow and choke on? No matter, you had Duplo for those kids. Tiny little blocks that you or your parents inevitably would step on (and it really really hurts too)? Who cares! Too much fun was going around. Too much….Lego fun. Legos had the perfect balance of creativity and directions to assemble. Sure, you can make that spaceship the way the box has it. Or you make it slightly different with your own twist. Or to hell with it all and go outside the genre altogether. I used to own a lot of those old space ones as you see pictured here along with their medieval/knights line. Since that time, Lego did a very smart thing and got the rights to make their stuff in many different movie franchises, like Star Wars, LOTR, and Pirates of the Caribbean. This way, they can still maintain cultural relevancy in a video game world. The issue with Legos has always been how expensive they are. Yeah, the were very expensive in the 80’s as well. But you pay for what you get; high quality stuff that will last a lifetime.

Yes, I understand this one is a somewhat surprising #1. I bet most of you guys don’t even know what these are. So let me describe what these are: stuffed animals that represent NFL mascots. And yes, this combines two of my favorite things; teddy bears (which was going to be my top 10) and sports. So it is natural that these guys would be my #1. Also, these guys are soooo cute and well made. Sure, they were somewhat expensive, but I didn’t buy them with my money. My parents did. HAHAHA. Anyway, I had quite a few of these things, 14 to be exact. And yes, they are still around. In fact, I have two of them in my office right now; the Seahawk and the Bronco. So what to do with them other than oooh and aww while looking at them? Well, I used to play 7-on-7 football with them. As you can see from the picture, they had a football, so I used a quarter as the official ‘ball’ of choice for these games (which only allowed the Seahawks and the Bear to carry the ball due to position of their wing/paw). Sometimes it was NFC vs AFC, sometimes it was animals vs people, sometimes there was a draft. Whatever the contest was, there was always a guarantee of good natured fun for the entire family.

Note: A perfect 7 AFC/7 NFC symmetry. Well, Seattle was in the AFC at the time, but I knew what was coming……..

And yes, they are rare and worth a fair amount of money…..which means nothing because I still love them!!