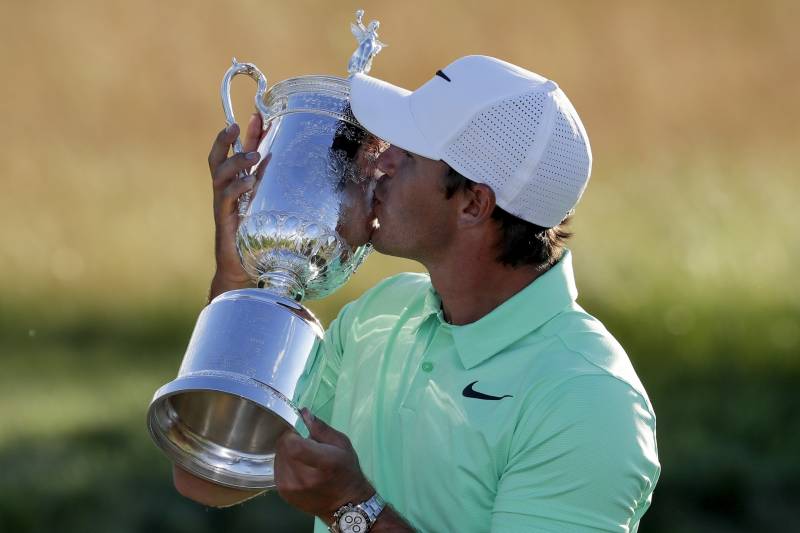 So I guess there was some sort of golf thing last weekend. I only know this because all the white old dudes on the radio were talking about it. They were making it sound like it was a big deal, so whatever. Some guy named ‘Brooks’ won. I guess Saucony McLitterhosen or Asics Brambelbush didn’t fare as well.

Anyway, I may not know that much about golf, but I do know rating, and the rating for this steaming pile of boredom were pretty…pretty…pretty low. So this indicates something:

The Tiger Woods effect was overstated.

I remember when he was just a little cub, appearing on the Dick Cavett show and grabbing headlines when winning amateurs. The hype machine was starting to churn. Nike signed him to a multi-million dollar deal before leaving Stanford. He was the next big thing.

And he was. But not in exactly the way it was anticipated.

Sure, over the course of his 15 year career, Tiger Woods has been wildly successful. Not only winning tons of titles, not only making Nike gobs of dough and paid for his contract 10x over, but he generated loads of cash for his fellow PGA tour members. More eyes on golf = more sponsorship = more money.

But there is something Tiger did not do at all, and that is change the face of golf.

I remember the first Nike ad campaigns. They were pushing Tiger as this sort of messiah for golf, a changing of the image of golf from a rich/white/male pretentious country club activity to a sport that is accessible and interesting to all. Even at the time, there were all sorts of reports and data backing this up; inner city kids starting to learn golf, camps dedicated to golf were spouting up, etc.

Well, 15 years later in this ‘revolution’, what do we see? Pretty much the same faces we saw pre-Tiger. Rich/white/male country club good ole’ boys crowding the leaderboard every week with a few foreign names in the mix.

Honestly the only people that truly enjoy watching golf are…well..the people who play golf. This is not true with any other sport. I mean the appeal of the NFL, NBA, etc are not based on the participation of their fans. It is mostly based on the action, the athleticism, and the entertainment of the game. Golf simply does not have that. Golf is a boring, entertainment-empty activity that only grabs the nations attention because the very media members who exalt the PGA are rich/white males as well that….guess what…..also play golf.

Tiger Woods did nothing for the long term evolution of the game. Nor did he ever have the interest (note the lack of protest he had when playing at all-male clubs or all-white clubs). He made his money, he made everyone else around him money, and that was it. There has been zero change in who plays golf, how it is covered, and who is interested in following the tour since his skills diminished.

So no matter. We can let outlets like ESPN, Fox, etc act like the US Open is a big deal because they personally care. But golf is not mainstream, nor will it ever be.