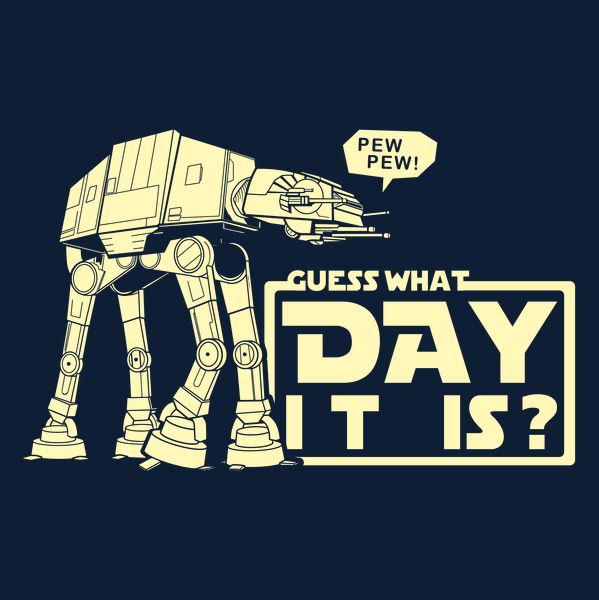 I know, I know. I am not a fan of stupid, made up ‘holidays’ like this. I think the advent of social media has advertised these types of days and ensconced them into our culture unwittingly.

Anyway, instead of being a curmudgeon about this, I’ll play along. I criticize Star Wars a lot on this blog (especially the last two efforts by Disney….ugh), but I actually really like Star Wars. Or at least the concept of having a fantasy story set in space. In fact, I would argue Star Wars has become America’s sort of mythology; granted Star Wars is not an origin story for America, but we a relatively new nation and have not had a chance to create a lore to pass down from generation to generation. Star Wars is sort of like that for us. Also America being the main player in the Space Age helps this as well.

Anyway, to celebrate Star Wars day today, I’ll give you the 4 (for May 4th) things I like about Star Wars the most:

The imagination of George Lucas is very deep. Think about all the of the planets, the costumes, the weapons, etc. that go into the creation of Star Wars. It is a feast for the eyes. Even the much maligned prequels have a great underlying imagination to it. The bright colors, lights sabers, the diversity of the worlds, and the ‘pew pew’ing of all the lasers makes this a movie series that is always fun to watch. Sans ep.7.

They just are. The Force is cool. Wearing robes is cool. Controlling other people’s minds is cool. Having a light saber is cool. It is just cool to be a Jedi. I wish my midichlorine count was higher.

Ewoks make everything better. In fact, not only should they play a more prominent role in the Star Wars franchise, I wish they spilled over to other films. Think The Godfather is a perfect movie? Stick an Ewok in there. Better film. Think Casablanca is a timeless classic? An Ewok playing ‘Time Goes By’ elevates it to another level. Citizen Kane; best film ever? Well, if Charles Foster Kane’s final word was ‘Wicket’ instead of ‘Rosebud’, best film ever ever ever ever ever!!!

I maintain the operatic scale of John Williams score is a huge reason why Star Wars has not only the mass popularity, but the staying power. The first film was released in 1977, and even now everyone can recognize the opening chord:

Hear it? Of course you do!! It is amazing how that simple theme can create all sorts of memories and flashbacks to the film.

But not only the theme makes the music of Star Wars memorable. Every character, every planet, every situation has a distinct theme to them. The movies have wall-to-wall music. When you hear the entire score without the movie, your mind can actually picture what part of the film you are in. What other film score does that?

So there you go. My tribute to Star Wars.