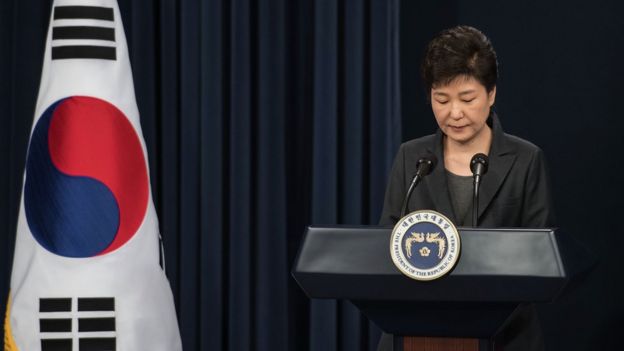 There has been a lot of criticism about our candidates this election term. In fact I hear the same rhetoric every 4 years; the candidates are all corrupt, the whole system sucks, it is the lesser of two evils, etc. This year the diatribe is no different, although it is fair to say one of the candidates truly is different.

Regardless, it is so easy to be down on our country’s electoral process. People like to be so critical of such things because it makes them feel smart and informed.

But let me tell you something, things can be worse.

For example, look at South Korea and what is happening there now.

I know I know, if a news story is outside of America or the UK, we tend not to care, especially during a heated presidential race. But this story is way too juicy to let sit.

The South Korean president, Park Geun-hye, is being ‘asked’ (or demanded) to step down from her post by a mounting opposition.

Her main advisor claims to be the modern day Buddha, leads a cult movement, and has heavily influenced Park’s policy making and has illegally seen confidential documents.

In other words, the country is run by a witch.

This is exactly like Melisandre and Stannis Baratheon in Game of Thrones. I mean exactly, sans the daughter being burned alive. You have a political player being influenced by someone who thinks they have magical powers!!!

And it is not like South Korea is some shitty little country in the middle of nowhere. This is a huge trading partner with the US. They have significant companies there such as Samsung, LG, and Kia. Not to mention their importance in a geo-political sense based on the fact they are situated next to North Korea. So yes, South Korea is a very important country in the world.

And it is run by a witch.

So you see, things could be worse.