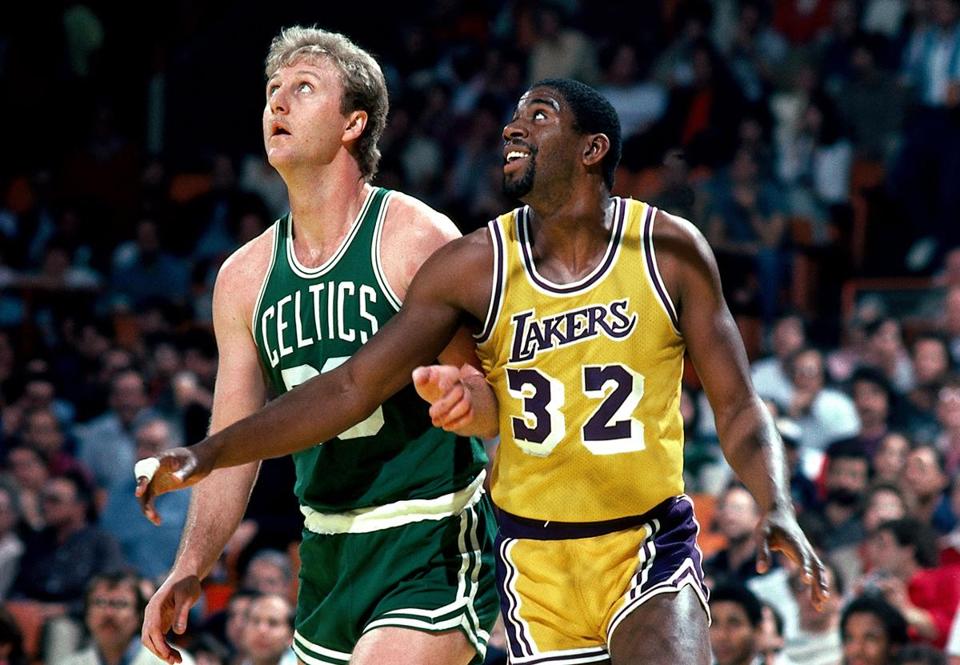 Sports are filled with iconic rivalries; Brady/Manning, Ali/Frazier, Globetrotters/Generals. But none quite incited the same interest as Bird and Magic. This rivalry started in college, where the hick from French Lick brought his Indiana St team out of nowhere to get to the finals only to lose to Magic’s local college team. Both went to the most historic teams in the NBA. Both met in the finals multiple times. Both are the primary reason why the NBA grew from a cocaine-filled league in the 70’s (that had their finals on TAPE DELAY) to the behemoth it is today.

I liked these things. Granted, I never owned a pair; they were really expensive. But I admired these form of pantaloons from afar for years. Where did they go? Why did they fall out of vogue? I mean look at all the zippers and pockets. Look at the light nylon fabric. Look at the multiple colors you can get these things in. It is just a shame to see parachute pants ironically free fall out of style. WWF was great. Not NWA. Not WCW. Not this WWE bullpoo. Not even the WWF with the panda logo. I am talking old school, Hulk Hogan, Macho Man, Andre the Giant, goofy as hell fake wrestling. I don’t like this new type of wrestling; gritty, R rated, and more edgy. I like my wrestling dumb, stupid, goofy, and fun. Also, I am an adult now that does not live in a trailer; don’t think I am the current target audience for the WWE.

I have a love-hate relationship with coming of age films; I love to hate them. The Breakfast Club, Pretty in Pink, Ferris Bueller’s Day Off, Stand By Me, The Goonies, Better Off Dead, Say Anything, Fast Times at Ridgemont High, Revenge of the Nerds, Lucas, the list goes on. Now not all of these films were bad (Say Anything is the best of this lot), but there is no question that this coming-of-age trope was beaten to death in the 80’s. Sure, there have been some attempts to bring this genre back, but it is not the same. Let’s get some of these ridiculous depictions of what high school is all about back on the silver screen so I resume hating them again.

This Olympics was so much fun. At this time, the Cold War was at a sub-zero temperature. In 1980, the US boycotted the Moscow games. So what did the USSR do? Boycotted our ‘84 games. And who benefited? The American people, that’s who. We won virtually every medal. Carl Lewis won 100 gold medals. Hell, I think I won a few as well. There was no competition at all from any other country. It was big bad America feasting on all the other countries. But probably the best part was this; McDonald’s ran a deal where they gave you a scratch’em card where when scratched, revealed an event. If the US medaled in that event, you win free things like burgers, fries, etc. Needless to say, this promotion was thought of before the Soviet Union bowed out. And McDonald’s lost tons of money on this, while America got fat. Hmmmm, wonder what happened to McDonald’s after this…….. Remember when Michael Jackson looked like that? A handsome, talented, and young singer that pretty much owned the world in 1983. Thriller was the highest selling album of all time. Every song of that was a hit. Those songs, to this day, are still played everywhere. When Billie Jean hits the speakers, everyone gets on the floor. When you hear Beat It, you have a sudden impulse to get in a benign knife fight with a gang. WHAT THE HELL HAPPENED TO THIS GUY? We all know his story; childhood star to pop megastar to crazy plastic-surgery guy to white guy to child molester. We need the old Michael Jackson back and rid our memory of that very strange man I don’t even recognize.

I love Nintendo. They changed the entire video game world in 1986, making a home console that had games that were equal to or better than arcade games. 8-bit games, two buttons, great graphics, fun characters, and two buttons. That is what video gaming is all about to me. Now these games are so complex. Multi-player, intricate plots, tons of options within game, 3-D point-of-view graphics that are more realistic than ever, and 10+ buttons. I cannot keep up with this world anymore. Give me back Mega Man, 2-D Mario, Zelda games that I understand, and left-right scrollers that are simple yet challenging. Those 8-bit games had a charm in of itself. Maybe that time is gone, but I say bring it back! Let’s make some new 8-bit games and get that production line going again. I mean it has only been like 20 years since one of these games were made, I’m sure some of the parts are still around.

Neon as an element; still around. Neon as a color choice for attire; not so much. And that is a real shame. Hot pink, glow-in-the-dark yellow, fluorescent green, bright orange, all colors that are a feast for the eyes. All colors that have pretty much disappeared from our clothing palette. I would really like to see these ostentatious hues paraded around once again. Seeing neon colors just makes you feel….happier. We as a society need to bring these bright color tones back into the fashion arsenal. I think this, along with Kylie Jenner’s Pepsi distribution, will help mend America’s deep divide. You what is better than having a common enemy? Having a common enemy that will not attack due to fear on each side. The Cold War produced some great material for spy novels, war films, and post-apocalyptic science fiction. When the USSR crumbled, the US just got fat and happy. There was no common foe, there was no true threat to our democracy. And since that time, the espionage genre has sputtered. In fact, the best spy thriller since that time is The Americans, which is set in the ’80s!!! Yeah, we have had some terrorist threats and there is this North Korea thing, but those are definitely not as much fun as the Cold War. I know Russia is making a play to become a threat to America, but it seems so hollow and pathetic. Putin’s only hope Trump, but that is not a long term solution to bringing back the Cold War. We need some common enemy to filter back in our societal conscience so we can all agree on something again.