So let me get this straight; a car can mount a huge lead time-wise, short of a lap lead, and then lose virtually all that lead due to some joker crashing off in the distance? Not fair! Sure, you get to be the lead car on the restart, but all that lead time you accumulated is now gone. Thanks, NASCAR.

9. Only 2 Bases For All on a Ground Rule Double

How many times have you seen a guy on first who would have clearly scored on the hit, but has to retreat to third because the ball happened to hop over the fence? So lame. I mean this is punishment for a well hit ball. And guess what happens next most of the time? Ground out. No run. Thanks rule book.

8. Only 2 Points for a Safety in Football Showing that kind of physical dominance, shoving an offense backwards so far they score an anti-touchdown, well shouldn’t that be worth more than a crappy field goal? Also, they are so rare, I say reward this event with 4 points, get the ball, and a glass of champagne. The puck has to be in your ‘zone’ before your team can enter the zone. Uhhh, OK. So the results of this; the puck gets booted out of the zone, at the edge of the zone is a guy reclaiming the puck, but he can’t advance it back in because one of his teammates is still in the zone. So the guy with the puck has to skate around until his buddy skates out of the zone, just so he can go back in. Sound stupid? Well, wait until you see it live. So lame.

This is even stupider. It is like hockey, but the line of offsides moves. Yes, the line of offsides is the last defender. So the result of this; the dreaded offside trap, used by all inferior teams to ‘trap’ good teams that are trying to actually play soccer and score. Yes, a defensive team can all in unison move forward, leaving the last offensive guy alone near the goal. And that is considered a good play. Wonder why people think soccer sucks……. Basketball is full of athletic players, running up and down the court performing acts of physical artistry that you don’t see in other sports. Then all of that ends to grinding halt when the lame guy off the bench pats guys like DeAndre Jordan to get a foul called, send DeAndre to the line, and have him make .5 out of 2. Yeah, that is in the spirit of the game. I am not sure why this is not called an intentional foul, which results in 2 shots and the ball back. I mean isn’t this ‘strategy’ the very definition of ‘intentional foul’? Calling this act an intentional foul would quell this strategy for good. But the NBA doesn’t do this. Why not? Tradition, the old guard wanting the game to not change so they want players to make free throws, or whatever. Anyway, it is stupid.

Have you seen a golf rules book? It is thicker than an unedited version of any Tolstoy novel. Where to drop, where to place the ball, what constitutes as a stroke, what is a penalty, etc. Ugh. It is exhausting just thinking about it. And guess what? If you sign your scorecard with an incorrect score unwittingly, you get thrown in PGA prison where you are pelted with golf balls by Hootie Johnson until he satisfies himself in front of you. Oh yeah, you lose like 4 strokes as well. Punishment fit the crime? According to golfers, yes. According to people who have a sense of fairness and are not idiots, no.

3. Pass Interference in the NFL

It is not so much the spirit of the rule that is wrong, it is the way it is legislated. I wrote a whole thing on this earlier, so I don’t need to rehash this. Refer to this for more.. But is inherently unfair that an offensive player can pick, rub, climb over, arm bar, or whatever to a defender yet when a corner slightly grabs the receiver, the yellow laundry is thrown. And for a 50 yard heave to end in a 50 yard penalty if players bump into each other? Not fair. And very very stupid.

2. Batter Can Go to First Base After a Third Strike Passed Ball 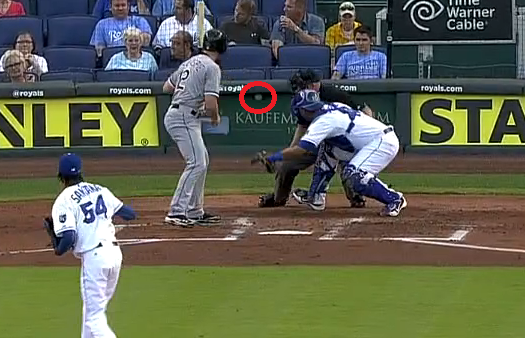 This one never made sense to me. So a ball gets thrown past the catcher and the batter cannot go anywhere, unless he swings at it on a third strike. At that point he is allowed to go to first. So he reaps a reward for such a shitty at bat. Yeah, I’ll just swing at the worst junk on strike two knowing the catcher cannot possibly get to that ball. Yeah, sounds like a good rule to me. Really within the spirit of the game.

1. 3-Seconds in the Lane of DEFENSE in the NBA Worst rule in all of sports. In fact, it is so bad that this rule does not exist at any other level of basketball. The origin of this rule was to modify the ‘illegal defense’ rule in the NBA, IE; no zone. Is this better? Sure. But that is only because the illegal defense rule was the WORST RULE EVER EVER EVER!!! All of these nuanced rules are just so teams don’t sag off, crowd the paint, and not permit driving lanes. The NBA wants players to have some driving space. But with the 3 point shot being so easy, teams can never play sag zones. You know why? 3>2. This rule is rarely enforced. I mean the refs barely count to 3 on the offensive player camping in the paint, you think they can keep up with a defensive player in there for 3 seconds, who is NOT on a double team or guarding a post player within like 3 feet? This rule has more conditions than an insurance policy, so it rarely plays a role in the game. But the spirit of the rule is so stupid, it has to be #1.