Let’s start off this list with a very ambitious work from the Wachowski BROTHERS. Back in 1999, this was the ultimate cool movie; trench coats, machine guns, techno music, and of course that rotating camera and start/stop time flow that made you think you were in a video game. Yes, it was novel and awesome for its time. And the overall story, well that was pretty cool as well. An alternate reality? Is our world real or not? Does it even matter? Pretty deep stuff, huh? Well, the movie series faded a bit with a late release for the sequel (which was not that bad) and the third one (which was not good at all), got dismissed by fans because the newer films were too much like the first in terms of CG, and the finale was gobbled up by the popularity of Lord of the Rings. But despite the series crawling to the finish line, taken as a whole this was an original and inspired effort.

I don’t care what you say, these were good movies. Of course I have a bias and affinity to anything Middle Earth, but this entire list is biased. I mean it is MY list. So suck it up and read on. I know the issues people had with this prequel to LOTR, as I have documented already in this article. But to simply dismiss this trilogy just because it is not as good as LOTR is not fair. Martin Freeman was the true star of the series, and the trilogy serves as a fine bridge into the events of LOTR. So this gets to be on this list. But no higher than 9.

8. Back to the Future

This was just a fun series overall. Much like the Matrix, the wheels came off a bit at the end, but there is no doubt the journey was a hoot from beginning to end. The reason why? Well, the chemistry between Michael J Fox and Christopher Lloyd was the soul of these films. If it wasn’t for their strong back-and-forth, the second and third would have really fallen apart. There was too much cutesy things like Biff being played by Biff in all of the eras visited, Michael J Fox playing his future son, etc. The glue to the series is Doc and Marty.

This is the newest trilogy on this list. Hmmm, I guess that wasn’t very informative, considering the latest film came out 3 weeks ago. This series is simply excellent. It has social commentary, it has the profile of the rise of a very interesting character in Caesar, it has a a compelling storyline, and it has a magnificent performance by Andy Serkis. All three movies can operate as stand-alones, but definitely operate best together to build a grand epic. Although none of these films pop out as a potential Oscar winner and this series will always be belittled a bit for being a reboot and not an original, this is a great trilogy and hope it will be seen as such in the years to come and not forgotten.

The Dark Knight trilogy transformed the way studios created superhero movies, for good or for bad. Every superhero movie had to be brooding, realistic, and gritty. The innate silliness of being a ‘super’hero became lost and was replaced by Dark Knight rip-offs. We have now seen that trend die down, mainly thanks to the failings of Zach Snyder and the success of Marvel, but there was a time when all action films wanted to be the Dark Knight. Too bad. Harder than it looks. The Dark Knight trilogy is excellent in every way. Some of it had to do with the story, some due to Christian Bale, some had to do with great villains like the Joker, some due to the novel idea of making it so dark. But the main reason is Christopher Nolan. The man is good. I am not sure if this is his magnum opus, but it is and will be his most popular work. 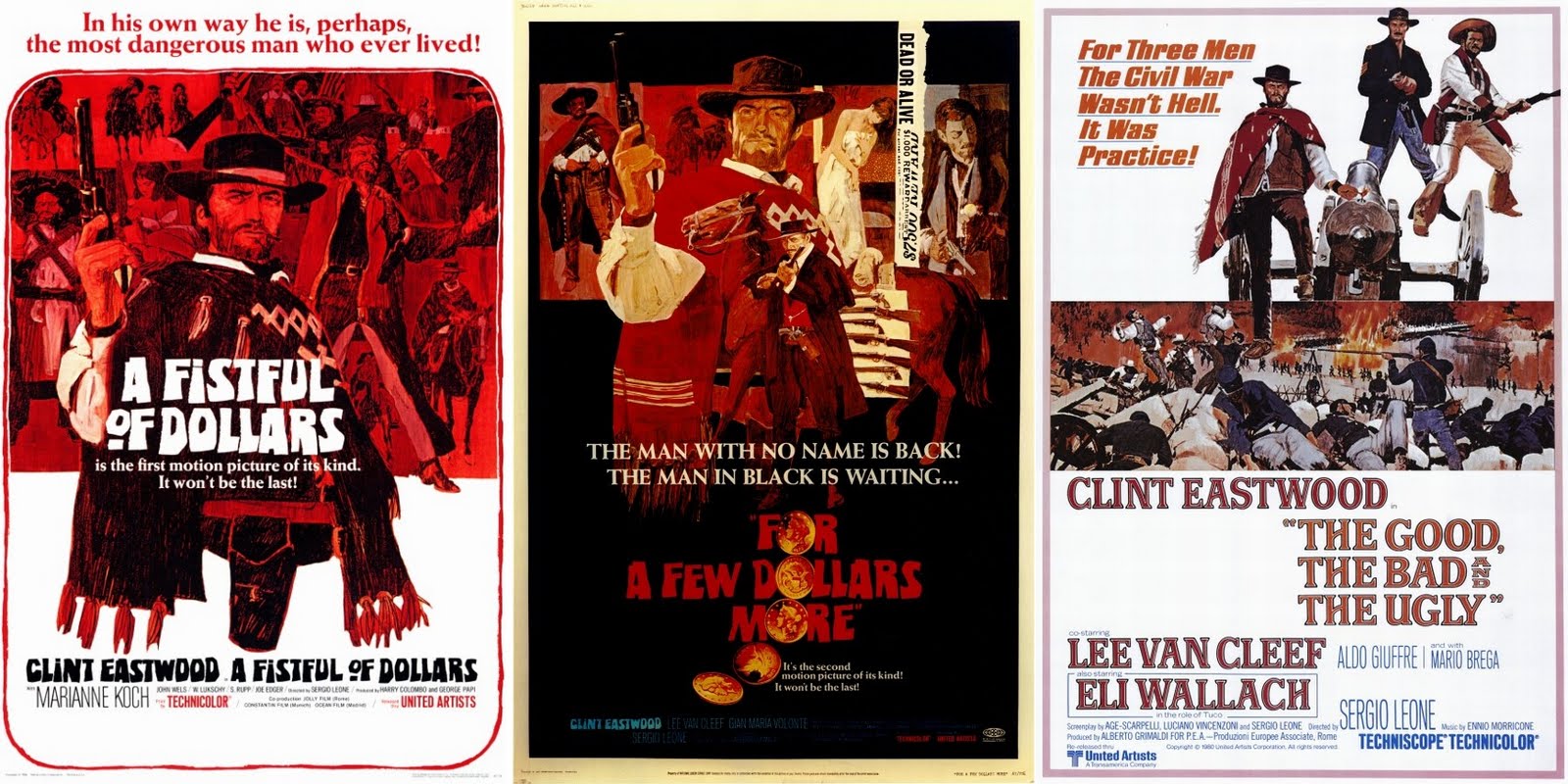 I love spaghetti westerns. So deliberate, so stylized, so cool. These three movies are really stand-alones with only Clint Eastwood being the binding character. I mean Lee Van Cleef played a good guy in the second and was a completely different guy who was the ‘Bad’ in the third. So much for continuity. Anyway, I love these movies and they inspired an entire genre upon itself. In fact I would say the majority of this younger generation think of a western as being one of these Leone films instead of ole’ John Wayne shootin’ down dem indians. How an Italian filmmaker, shooting in Spain, an American western opera makes no sense at all. Yet it works.

Wait a second here….why isn’t this one higher on the list? I mean The Godfather and The Godfather II are 2 of the top ten greatest films of all-time? Can’t we just ignore the third? Sorry….you CANNOT!!! A trilogy has 3 parts. Not 2 parts. Not 4 parts (the reason why Indiana Jones didn’t make it on the list). And you can’t simply pick and choose which movies you like in a series in a list that is ranking these movies as a single trilogy. In other words, the experimental unit here is the set of 3, not the cherry-picked favorite. Anyway, the third one was not awful. But it was Al Pacino at his worst. He was hootin’ and hollerin’ all around the set. This is in exact contrast to the calm, conniving character of Michael that was built for over 6 hours of film. This could have been a great film, but it wasn’t. Hence the trilogy being only #4. But to be fair, that is still pretty high.

Much like Planet of the Apes, these films do not depend on each other. Each can be seen separately. But when together, you get a wonderful story arc that spans over the course of an entire childhood. Pretty much anyone can relate to Andy and his growth/evolution throughout the films. Obviously we don’t see him in particular, but we see him via his toys. The characters are fun and endearing. Pixar has this way of making things funny and entertaining for both adults and kids without pandering. Toy Story is their ultimate offering on that front. And if you didn’t tear up at least once in the second (Jessie’s story of abandonment) or third (where Andy grew up, left, and passed them on to the next generation), you have no soul. Side note: rumor has it they are making a fourth one. Let’s hope not. The story ended naturally and right on point. No need for more.

I know, I said earlier that a trilogy is made with 3 movies. And you are not allowed to cherry pick the movies you like in a series. But c’mon. Isn’t the original trilogy of Star Wars seen as quite different than the prequels, or even this new serving of slop? The were all filmed with the same cast from 1977-1983, and the next ones didn’t come along until 1997, with an entirely new cast! And this new Abrahms poo, well it is different studio all together. Are all of these films canon? Definitely. But as far as an entire series, I think it is fair to subset this group into ‘original’, ‘prequel’, and ‘poo’. So there you go. Star Wars. IV, V, VI. Original trilogy. Awesome. Star Wars was my childhood; the toys, the listen-along book series, and all other paraphernalia Lucas was selling kids in the early 80’s. Heck, I went to see them at the theater on multiple occasions (remember, this predates its release on VHS). Looking back, they still are great. Of course ranking this trilogy at #2 is steeped in nostalgia, but they really are timeless films.

1. Lord of the Rings

If you didn’t know that this was going to be #1, well, you know nothing Jon Snow. No contest. By far the best trilogy ever made. I won’t repeat myself about my admiration for these films. I have many prior posts that illustrate why. But there really is no argument that this is best trilogy ever. All three movies nominated for Best Picture, with the third winning 13 Oscars. All the movies work seamlessly together (which is not surprising because they were all shot at once and sliced into 3 films). And it is the only film franchise that has satisfied the critics, the inherent fanbase, and the hoi polloi equally. Those are three separate types of people, all working against each other! Yet, you have the success of these films. Amazing.

Anyway, Lord of the Rings rules. Just deal with it.