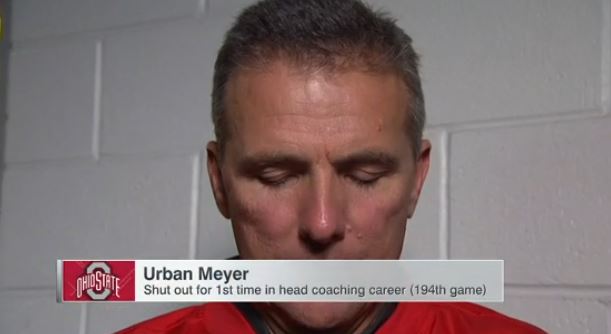 I hate Urban Meyer. Always have, always will.

He always symbolized to me the very thing I hate most about college coaches; righteousness.

Not only do these coaches get to be called geniuses, loved by the entire community, and get paid millions of dollars (most of the time from state money), they insist on being referred to as ‘leader of men’ and ‘teachers of life, not just football’. Yes, they get to be rich, famous, and be deemed saints.

Of course they only mentor the boys that are insanely athletic and good at football.

This level of sanctimony is none more prevalent than in Urban Meyer. Sure, all coaches have this misguided belief that they are true gurus of life and not just coaches trying to win football games (I hear it everyone in this market about Chris Peterson), but The Urb takes the cake. He said he left Florida for ‘family reasons’ yet took at job at ESPN that year to do commentary; a job that has travel demands well beyond being a football coach. He later took a job at Ohio St the very next year when the family thing got old. Yet throughout this entire time, he insists that he is more than a football coach, preaching the gospel to his players, never sharing these words with any at-risk kids that are not 6’3, bench 225 10 times and run a 4.5 40m.

But I don’t think he should be fired.

I get that in this heightened time of sensitivity he actions (or non-actions) regarding his assistant coach’s abuse towards his wife is not good. And I would even say that it is irresponsible and selfish. But not a fire able offense.

Urban Meyer did not commit the crimes. Urban Meyer did not obstruct justice. What he did was not want to bring attention to his program in a bad way, something I am sure most if not all coaches would do. Urban did intervene in 2009 a bit with a Christian retreat for his coach and wife. Urban did do some ‘see no evil, hear no evil’ stuff as well. But this is DEFINITELY NOT THE SAME AS JOE PATERNO.

Paterno protected a known pedophile, enabled him for 20+ years to use his facilities to recruit disadvantaged boys via his charity to prey upon. This was close to a systematic child rape circle. Urban, on the other hand, was wary of getting too involved in the personal life of his coach.

No, I don’t think what Urban did was right. I think he should be punished a game or two, administrative leave maybe, but fired? I mean really? You are willing to take a man’s life, everything he worked for, for this? It just doesn’t seem fair.

And remember I hate Urban Meyer.

So if you are one of those types who love to point the finger and judge everyone who made some bad and self-protecting decisions, let me remind you the words of a man far wiser than both you and I: