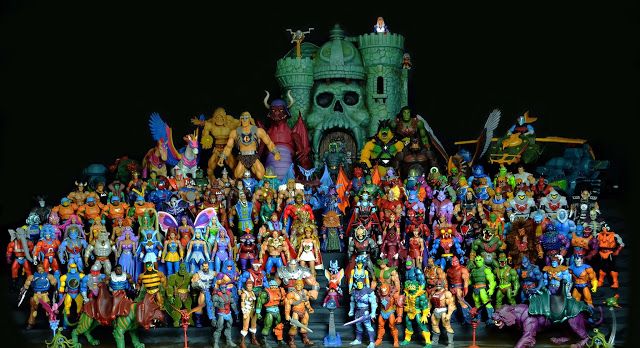 I love toys. I had so many as a kid yet I still wanted more. Such a greedy son of a gun, huh?

Anyway, I had all sorts of action figures. From Star Wars to Indiana Jones to superheroes to even Tron, I liked them all.

Well, except one franchise.

He-Man, or the official name: Masters of the Universe, was not a world I cared much about.

I am not sure why. Maybe because there was no movie that set the stage for the characters. Maybe because the cartoon that was meant to create storylines was sort of lame. Or maybe because it is pretty much the weirdest idea ever. Regardless, He-Man and I were not play buddies.

However that does not dismiss the fact that He-Man may be the most important toy brand in history. Well, maybe Barbie, but hear me out.

I just watched a fascinating documentary on Netflix called ‘The Toys That Made Us’. It is a four episode series that showcases important toy lines such as Barbie, GI Joe, Star Wars, and He-Man. Instead of giving you a book report on what I saw, I’ll tell you what I found the most interesting piece to all of this was.

When Star Wars was ruling the toy world in 1979, Mattel was feeling queasy. First off, they shot down the opportunity for the rights to Star Wars 3 years earlier, which in retrospect was stupid as hell. And even though their Barbie line was still in the black, the all-important boy demographic was completely missing for them.

So in order to compete with Star Wars, a bunch of 30ish year old men made up He-Man and the entire weird world of Eternia. The main motif was set in another universe ala Star Wars and had primal medieval-esque characters ala Conan, both movies came out during this time. So to make their completely made-up thing work against the mighty Star Wars, they decided to make the action figures buff as hell and slightly taller. Seriously, this was the only reason why these figures look so outlandish; to stick out over Star Wars figures.

When they marketed their figures to main distributors like Toy’s R Us, they asked about the back story. One of the guys just made up the idea on the spot that there would be a comic book in every figure box. Out of no where! No plan at all. When the Toys R Us guys said that 5 year olds don’t really read, the Mattel guy, again out of no where, said they were making a cartoon. Say what?

So with no idea on a story, they contracted out their idea to the main Saturday cartoon creators at the time, Filmation, and let them do whatever. The people at Filmation did and hence you have He-Man.

So on the surface that doesn’t seem like enough to make it the most important toy line ever. But wait………..

This is the first toy line ever that was created first and then was followed by a daily 30 minute cartoon.

After the success of He-Man, about 20 different franchises were spawned within 3 years using this same plan of toy-to-cartoon. Rainbow-Brite, Care Bears, Jem, Strawberry Shortcake, Transformers, Thundercats, and the list goes on.

You may ask yourself ‘why wasn’t this done before’? Well, in the 1960’s something like this was sort of attempted. However government laws were enacted very soon that limited how and the volume of commercial time a TV program was allowed to target kids. This lasted for some amount of years until a guy named Ronald Reagan was elected and loosen these advertisement to kids laws greatly. So this allowed something like He-Man to have an essential 30 minute ad for their toys because…well…..they were not technically ads. They were entertainment for kids. Now that is obviously debatable, and still is to this day, but for now all those kids shows are officially not TV commercials.

Anyway, the details of this story are far deeper and more involved than I laid out here, but the important thing to know is that He-Man started this new way of selling toys to kids and was so successful that to this day this is how many toy lines are created today. Sure there are movie toys still, but you have to share the profits with the movie companies. This way you own all the intellectual property and therefore profits from the franchise.

Some may see this as greedy corporate America taking advantage of kids and parents. But I like to think of it as something that is pretty cool. These toys were a part of my childhood, and a good part that I remember fondly. Sure the concepts are sort of stupid for today, but the toys were not marketed to 40 year old men. I think the nostalgia and fun these toys created are well worth some ‘corporate greed’.

Anyway, if Mattel wasn’t in the toy business, they probably would have found a way of making profits doing something worse, like marketing cigarettes to kids or manufacturing knives for prisoners or selling nuclear weapons to Syria or whatever.