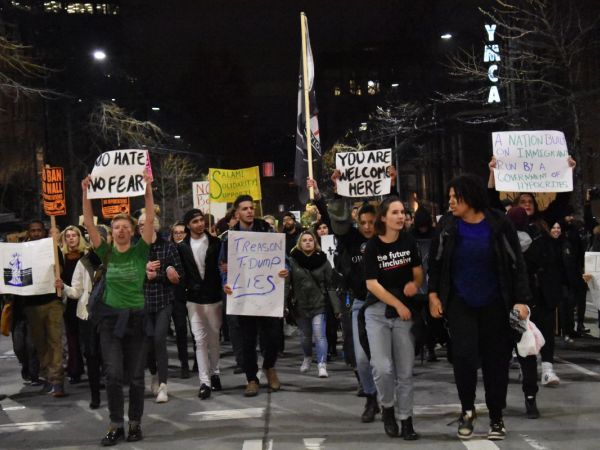 Yesterday in downtown Seattle, there was an ‘emergency’ protest organized by… .uhhh…..people I guess…..to show support in not supporting the unsupportable ban on immigrants to this country. Literally thousands of people gathered along the corner near Nordstrom’s to hear the governor opine about this ban, show off the clever signs they made at home, and to maybe shop around for some deals on cashmere sweaters if time allows.

So I am sure you are asking yourself ‘Why is this under your personal posts? This is much more like those Global posts you write where you profess to know exactly how the world should be run’.

Well, to answer your question, I was feeling very community-minded that day, so I actually went to this protest. And to see a movie afterwards at the Regal Theater 3 blocks down.

Now I have never gone to one of these types of things before. I mean I have always had a soft spot for social protest and fighting against what is wrong, but I sort of let others that feel more self-important that myself handle such matters. But my curiosity got the best of me this Sunday and I wanted to see it for myself.

I don’t know, maybe I am not a good guy, I mean many people have said this to me before, so they may have a point. But this protest didn’t really move the needle for me.

I know these new presidential policies are wrong and I do care. I really do. But it is so hard for me to look at all of these protesters with appreciation rather than criticism.

I mean I just see all of these people and feel many are patting themselves of the back more than Barry Horowitz (a GREAT WWF reference which I bet no one will get):

There was a lot of energy there, healthy energy that was non-violent, but I also sensed this strong self-righteous element that permeated throughout the crowd. It is like every drove their Prius to this gathering and shared gluten-free recipes over a cup of herbal green tea.

I mean the intent is correct, but is it effective? And how many of these people even voted? I bet at least 20% didn’t even check ‘Clinton’ on their ballot. And all the anti-Trump signs; yes some were funny, but some were filled with the same vitriol as a Trump supporter. It goes to show that many times the most heated of rivals are more similar than different.

Anyway, I know Trump is a stupid and pathetically horrible man who should be stopped along with his puppeteers. And I know we are living in a trying time were protests are needed. But honestly I feel more comradery and emotion at a Seahawks game than this protest. A lot more. Maybe sports is my true milieu, maybe I just relate to the fan world more than the social justice crusaders, or maybe I am just a bad guy.

Regardless, I think I should leave the protests to younger, the louder, and the one’s who have clever things to write on cardboard paper. But don’t worry freedom fighters!! I’ll support you from afar. Deal?