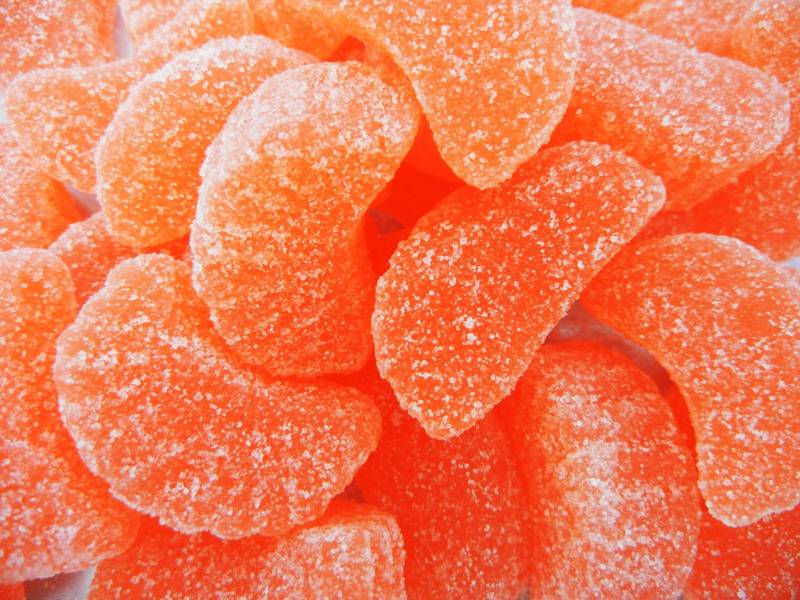 As you all know, last week I was in sunny Los Angeles, experiencing all the great things the second biggest city in America has to offer.

The problem is that this city of 15+ million people does not offer all great things.

When I first flew into LA, I was needing a candy fix. I mean after an exhausting 2 hour flight, who wouldn’t feel the need for a slight nosh at the end to replenish your energy? Anyway, I went to one of the convenience stores inside LAX in search of my favorite power food; candy orange slices.

Oh sure, they had some food there: Haribo Gummy Bears, chocolate bars aplenty, even differently-fruited gummy-ish products like fruit loops and Sour Patch Kids. But no orange slices.

So I naturally thought this was a one-time occurrence and proceeded to the next store.

OK, now I was getting a bit worried. You are telling me the entire Los Angeles airport is sans orange slices? No way. But instead of pressing the issue, I had to get a move on. So I got my Uber and went to my friend’s house.

Once arriving to my destination, I exchanged my pleasantries with my friend. But inside I was empty; completely zapped of energy. My quest was not complete. I needed some orange slices.

So after our greeting, we journeyed to the nearest 7-11. When opening the door I saw a wide array of candies; Haribo Gummy Bears, chocolate bars aplenty, even differently-fruited gummy-ish products like fruit loops and Sour Patch Kids. But no orange slices.

What? No way. This was the same thing at the airport. No way. Can’t be. Usually I would not stand for such nonsense, but it was late and I was starving. So I bought some gummy bears and refueled for the evening.

So this ‘no orange slice’ thing was playing on my mind the rest of the trip. Is is actually possible that this city does NOT have any orange slices? Well, the next day we went to Ralph’s (the LA version of Safeway) and checked out their wares. And guess what? Haribo Gummy Bears, chocolate bars aplenty, even differently-fruited gummy-ish products like fruit loops and Sour Patch Kids. But no orange slices.

Waaaaaaaiiiiit a second here. Safeway doesn’t have orange slices? There absolutely no way that Los Angeles, the city of Angels, the second largest metropolis in the US has no orange slices.

Well, my final day in LA we went to a candy store near UCLA. This place looked like that Harry Potter candy store; all sorts of candies and colors as far as you can see. Well, there was one color missing; orange. YES!! THE candy store of UCLA does not have orange slices. I call shenanigans on this!! So I asked the storekeeper about the lack-of-orange situation. She claimed something about the orange slices don’t have a long expiration date or something. You know, these things don’t need a long expiration date because they are so delicious and tasty. I find that an odd excuse not to carry them since every single damn store I’ve ever been in before had orange slices. Anyway, I left the state the next day orange-less and sad that there exists an entire city void of the flavorful orange slices.

I kid you not. This is all true. Not one place in the entire city had these things. I cannot believe this.

The first day I was back in Seattle I went to Safeway, checked out the candy aisle and bought the last two packets of orange slices. About 10 of them are resting nicely in my tummy as we speak. Take that California!!!