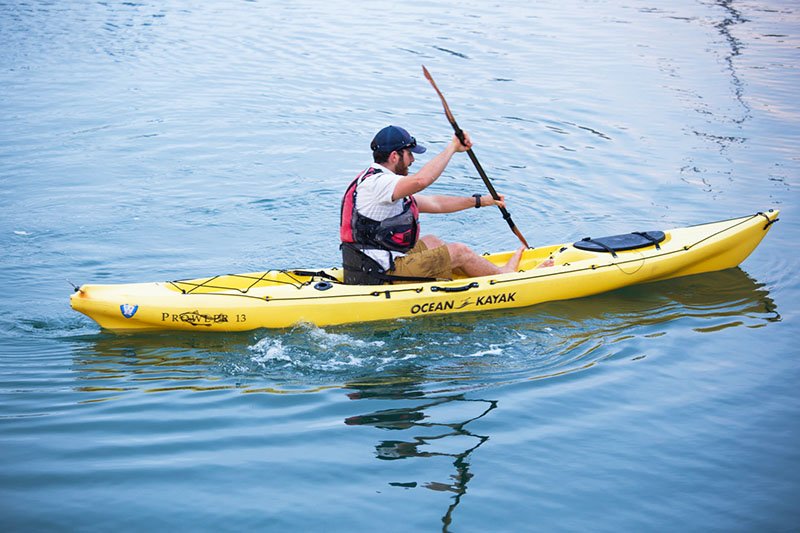 I have never kayaked before. In fact I have barely ever been on the water. This fact comes as a shock to most people in the PNW, where maritime hobbies are a staple. But coming from a land where the primary landscape is dirt and heat, it really is not all that surprising.

But that is true no more!! I am not a wee naive babe in the woods anymore. For you see last week, I grew a pair of sealegs, got into one of those funny looking Inuit-inspired boats, and kayaked across the great main.

Or across my friend’s little lake near their house.

Regardless, over the course of one day, I transformed from a person who got seasick just watching a Jacques Cousteau documentary to an ole sea tar who is bounded to his loving lady….the sea.

However this entire metamorphosis started in a very clumsy way.

First off, I didn’t know how to get in the kayak. Yeah, I know there is a hole at the top and all of that, which way is forward? I need to know my starboard and my port! Also, how do I physically get in? It is so low to the ground, wasn’t sure if I was supposed to sit down and sort of roll into it, or maybe jump and land butt first in it. There was really no telling from the instructions.

Secondly, how do I actually launch myself into the water? Once I crawled into this thing, I was sort of stuck on dry land. All the other people were in the water, so I knew there was something wrong. But once I got a push from a helpful onlooker, my aquatic adventure began.

As I was floating there at the edge of the the shore, there was one more issue; I didn’t know how to paddle. Yes, I had a paddle rod, or whatever that thing is called, but had very little idea what to do with it. I know that there is a ‘rowing’ involved consisting of a patented ‘forward-backward’ motion, but my technique was….shall I say…..subpar. I pretty much rowed and rowed and rowed as hard as I could, yet little children were running circles around me. Shameful, yes. Embarrassed? Sure. But I knew the love of the sea was buried deep inside of me and was about ready to burst out.

After slapping the water for about 15 minutes, I realized what I was doing wrong. Re calibrating my initial paddling strategy, I decided to ‘muscle it’ less, relax the shoulders, and let the paddle rod thingie do the work.

And bam!! What once was a helpless tyro floating in the abyss while being lapped by idiot kids has now honed his motor skills and became a dynamo. That old inexperienced-in-water-stuff caterpillar who couldn’t paddle has finally broke from his cocoon and became a seafaring butterfly who can paddle slightly better than before! About 30 minutes later, I returned to dock a changed man.

Tis a week since that hydro-fantastic experience. I am not sure if dry land is the place for me anymore. I need the ocean, I need the waves, I need that salt air against my face once again. Once again.

Or not. Whatever….it was fun and I’ll probably do it again sometime.