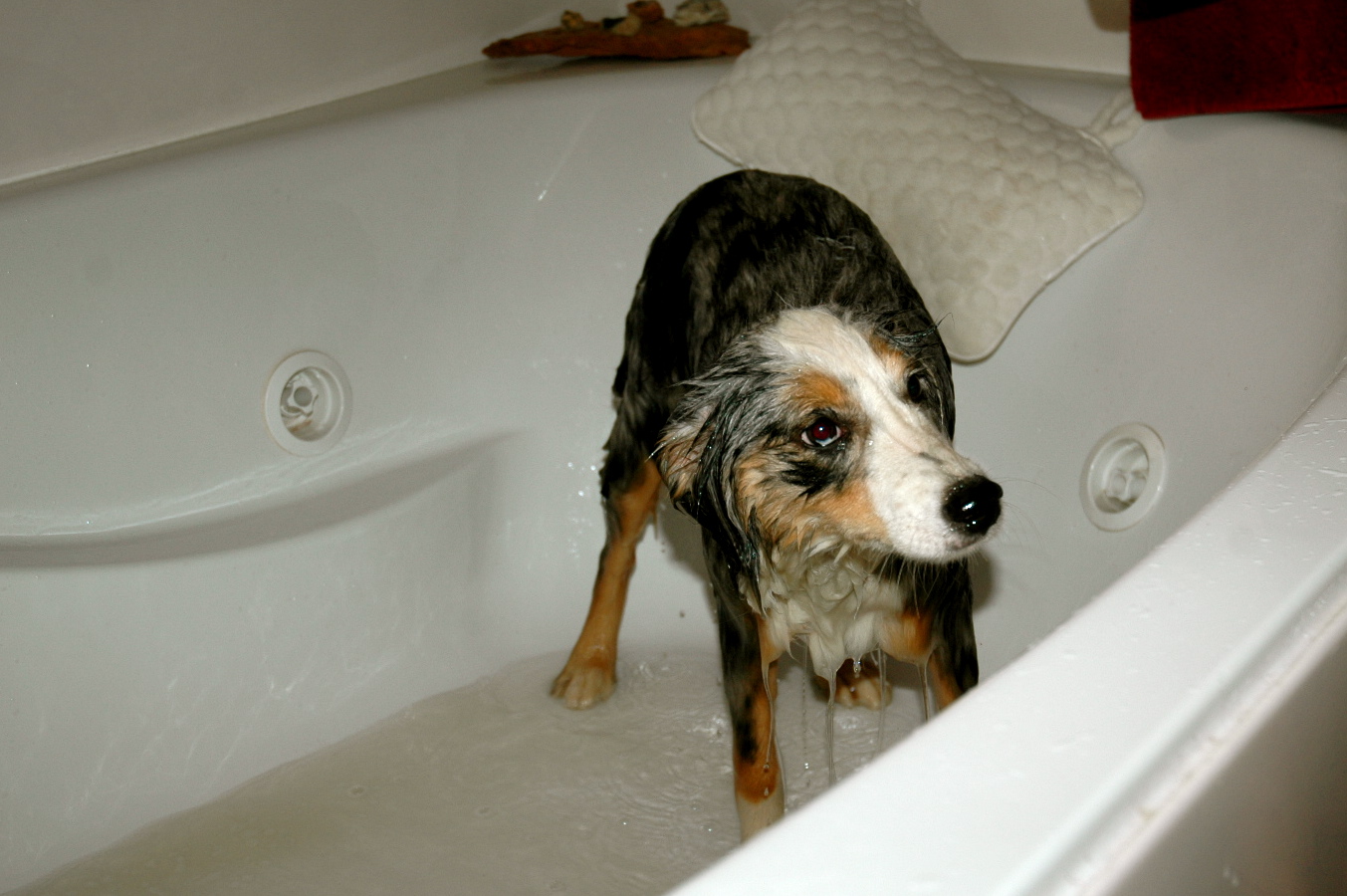 So I gave my dog a bath yesterday.

I was putting off this moment for a long time. In fact, I have not given my dog a bath in over two years. Now before you call animal rights people on me, there reason why is simple; it is not fun at all. Let’s see you guys do it, ASPCA.

Also, dogs that shed a lot don’t smell so bad because their coat is constantly being replaced (also, Arwen is a very clean dog, much like a cat as said in an earlier post). However, the issue is this coat is being replaced all over my sofa.

So I felt it was time to wash some of that dead hair off her and maybe some of this shedding will be limited.

Anyway, anyone who has washed a dog before knows this is no easy task. Every dog is different in the details of how it is difficult. Some dogs run around, some dogs shake off water all over the place, and some dogs are just pills and engage in passive resistance.

Arwen is the third one of these.

When she saw that I was getting out her shampoo and drawing the water, she went into resistance mode; this consists of dodging my attempts to rein her in. After about 5 minutes, I cornered her and led her to the bathroom. At this point she quickly goes in ‘potato sack’ mode; this is where she goes completely limp. This is very effective because dogs do not have handles like luggage, so ushering her into the bath is quite taxing. After grappling her and eventually dumping her into the bath, she goes into quiet sadness mode. This is just essentially her turning her back on the oncoming water. This is itself is not that bad, but one would also want to wet her front as well. Turn, turn, turn. After the turn, she mopes and just sits there, letting the water hit her face. Now the back again….turn, turn, turn. Now this doesn’t sound so bad, but these turns are much harder than you would think. As you can imagine, Arwen is of no help in each of these turns. Just grousing like a child.

After about 15 minutes of this masquerade of a bath, I was done with the entire endeavor and readied myself for the hardest part; the drying portion.

I used a towel. I used a second towel. I used my hair dryer. I used the towels again. I used the hair dryer again. And after 10 minutes of this nonsense (and a bad lower back), I had a damp dog, upset as can me, staring back at me confused about the entire process.

I stared back equally befuddled.

After aiding her out of the tub (another non-trivial task), she started darting around the entire home, rubbing her dampened hair all over my sofa, bed, and tables.

Why? Because that is just what dogs do.

She was thrilled to get out of the tub, mainly because she knew a walk and treats ensued for ‘being such a gooooood girl’, so there are no emotional scars from this scene, except for the ones that I developed.

And the best part? She is now shedding about 20% less than before; a far cry from the promising 90% that the shampoo bottle stated.

I think I’ll take her the PetSmart next time.