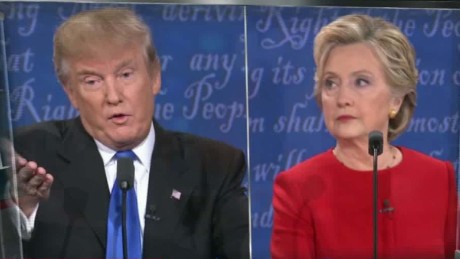 OK, the joke is over. The time has come to inject some seriousness into all of this silliness.

Donald Trump is not fit to be president of the United States. He is not qualified. He is not smart. He never tells the truth. He is a fundamentally malicious person who only loves himself. If you did not believe that going into Monday before the debate, then surely you do now.

If you are still on the fence, or better yet a fan of Trump, well, I don’t know what to say to you.

There are three types of ‘baskets’ that you could be in:

The think it is fair to say that each basket has an equal distribution of supporters.

Anyway, it is time to put a stop to this. It is getting worse and worse everyday. We liberals are so in tune with trying to understand the other side and being wishy-washy in the process. No more.

A vote for Trump is NOT a vote against Clinton. OK, in an indirect way it is, but that is not a valid primary reason. That is easy chickenshit talk that is somehow supposed to absolve you of responsibility of your vote. A vote for Trump is FOR Trump. That says you WANT him to be president. Before you vote for him, do some research on him. Please. I mean actual unbiased research on him. Then defend.