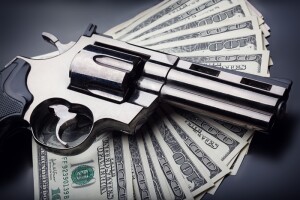 I hate this guy:

I mean I really hate this guy.

I mean other being a cowardly chickenshit who likes to enforce his brand of vigilante justice in gated communities, he kills children.

And he is non-apologetic about it.

So is the state of Florida, who not only sentenced him ZERO years in prison, he was given his gun back with an apology.

An apology the Martin family never got.

Now, I don’t care what side you are on about this: right to defend vs right to live without creepers following you around, but we all can and should agree selling said weapon via auction is not so good.

Yes, George Zimmerman, man with a rap sheet longer than the child shot: gotta check this out, sold his gun on-line for $120,000.

I mean….really? Where is the shame? I know if I shot someone, I would not wear that fact around like a badge of honor and profit off of it. I would like to think myself, and other humans, would feel remorse about something like that, regardless of who had ‘it coming to them’. I mean even Han Solo felt worse after shooting first and killing Greedo.

So I ask who is worse: the public menace which is George Zimmerman, or the guy who bought the gun?