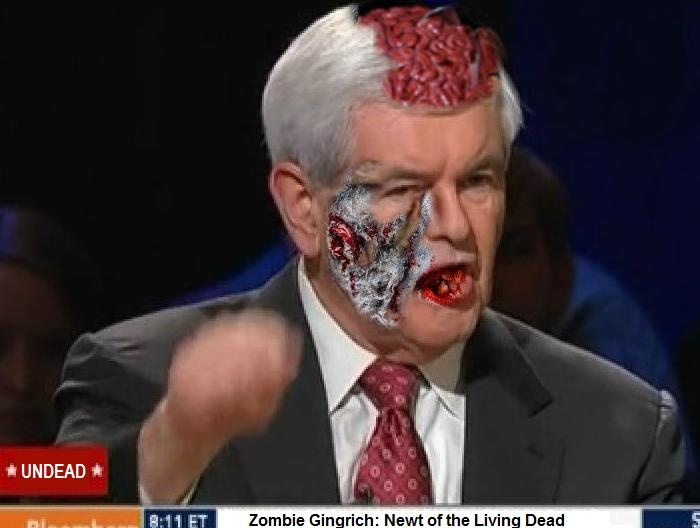 I never believed in a zombie apocalypse. All those show like the Walking Dead, Resident Evil, World War Z, really never held my interest because I thought the entire idea was sort of silly and derivative.

But apparently your new president-elect is proving me wrong.

Donald ‘The Necromancer’ Trump is doing what most thought was impossible; resurrecting the dead political careers of many a former DC stalwart. Instead of ‘draining the swamp’, he is simply pumping back in the old sewage that polluted the political realm in the early 90’s and beyond.

Let’s take a look at some of the people that have come out of the fray, people we all thought we politically dead but now have an extra life:

I thought this guy was dead when he left his dying wife in her cancer bed in 1994. Then I thought he was dead after his ‘Contract for America’ was violated by him multiple times when he cheated on his first wife…….then his second wife. Then I thought he was dead in 2012 when he ‘ran’ for president and his entire staff quit out on him during the GOP primary. But Donald, being the true necromancer that he is, breathed life back into him and is now (as has been) a huge voice in his campaign/cabinet selection.

I thought this guy was dead in 2012 when he resigned as CIA director for providing classified information to his mistress and biographer, Paula Broadwell. You would think Trump, a man who was quite critical of his opponent for being loose with State secrets, would leave the dead career of Patraeus alone for actually providing confidential information to an outsider. But once again, Donald the Warlock conjured up a spell that revived this man and propped him up as a possible Secretary of State option.

I thought this guy was dead after he became an also-ran in 2012. Then I thought for sure this guy was dead when he openly bashed the Donald, who as we all knew later won this damn election. But once again, Donald the Wizard has summoned his powers of revival and has introduced him as a possible Secretary of State.

I thought this guy was dead after he tried to run for NY senator in 2006 versus Hillary and gained zero support from the GOP. Then after the 9/11 hoopla died down, I thought he had nothing else to talk about. But yes, once again Donald the Witch-King brought this man’s soul back into the political sphere by letting Rudy play the role of Flavor Flav and bounce around Trump like an idiot.

I thought this guy was dead when he wrote that being Muslim is a ‘vicious cancer’ and Islamic militants will ‘drink the blood of their dying enemies’ in his book published in 2015. But guess what? Yes, Donald the Conjurer of Cheap Tricks brought back to life this dude and made him National Security Adviser.

Yes, Donald has done some other moves that are……unorthodoxed; basically hiring all of Fox News in cabinet spots that do not suit them, letting Steve ‘the Little Ball of Hate’ Bannon be in his ear 24/7, and trying to shoehorn his children into top advisory positions. But his greatest accomplishment is most certainly his ability to awake the politically downtrodden, wounded, and dead.

I guess you can at least say Trump is a recycler.

But again, what do I know….I’m just a visitor in this country.