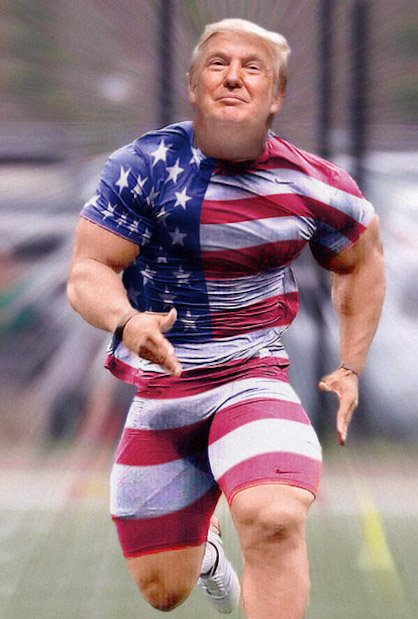 Last week, Trump introduced us to the stupidest idea ever; arming teachers to prevent school shootings.

This week, he said the stupidest thing ever;

“You know, I really believe you don’t know until you test it, but I think I’d run in there even if I didn’t have a weapon.”

But not amazing that Trump said this. I mean hell, we all knew something like this was coming. In fact, this is an absolutely typical thing he would say.

He does this all the time. No matter how tragic or how innocent the event is, he will:

I am not sure what Trump would actually have in mind if he ran in. Maybe he would bounce bullets off his magic cuff links like Wonder Woman, or maybe he would dodge the bullets like the Matrix, limboing around the shots in slo-mo like Neo. Regardless, we all know he would have NOT done any of this, being the cowardly idiot that he is. And we all know that no police or military expert would ever advise anyone to do such a stupid thing like that. But here is the president, doing his three-pronged method on a national tragedy.

He really should be impeached for that comment. Other than the lack of sympathy he demonstrated, he shows how absolutely stupid he is. Even if he has done everything else right (Lord knows that is NOT the case, but go with me on this), he should be fired for this comment. I mean this demonstrates a stupidity beyond a normal ill-placed comment. This doesn’t even border on mental retardation; this is mental retardation.

Seriously. Think about this. The President of the United States said he would run into a mass school shooting without a gun, implying he would save everyone from certain death. Holy shit. That is something that a 1st grader would say to try to impress his friends, only for his fellow classmates to tease him for being so stupidly pathetic.

I don’t have anything else to say about this. It is amazing and not amazing at the same time.

God he is so stupid.

And yet 30% of America thinks he is doing great.