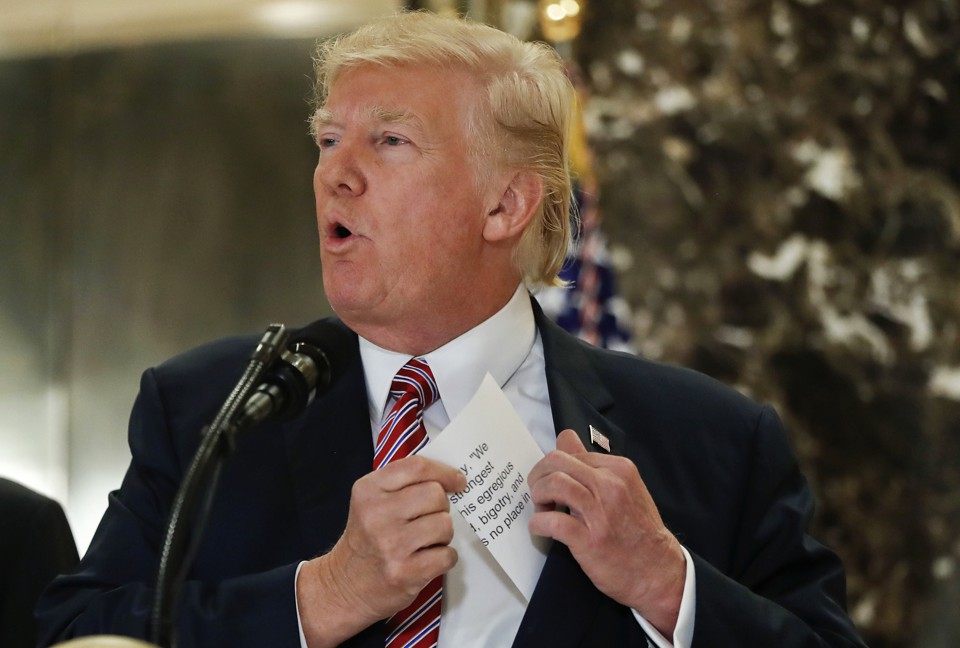 Wow, where to start. I have so much to say about all of this. But I’ll spare you the unabridged version and cut straight to things:

Most suprising moment: Trump ‘doubling down’ on his words on Saturday about how both the ultra-violent white supremacists and the protesters share blame in what happened in Charlottesville.

Most unsuprising moment: Trump ‘doubling down’ on his words on Saturday about how both the ultra-violent white supremacists and the protesters share blame in what happened in Charlottesville.

The moment you know you said something wrong: When David Duke comes out and gives you a figurative high 5 about your words, well maybe it is time to re-evaluate your stance on things. Duke is pretty much the moral compass of America: whatever he says or thinks, just do the opposite.

The tiredest issue brought up again: Confederate statues are still around? Crimany!!! When in hell are they going to take those down? Other than the fact the CSA were all traitors to the USA, they lost!!! Who celebrates losing more than the deep south? You know that huge statue of Alexander II in front of the Kremlin? Have you seen that sculpture of Napoleon right in the middle of Waterloo? Did you see that huge memorial Cleveland made to their 2016 Browns who went 1-15? Yeah….me neither. Everyone knows the Stars-n-Bars is just code for racism, so stop it already.

The biggest coward: Paul Ryan. His official response to the Trump presser simply contained generic admonishments towards racism that are about as heavy-handed and underdeveloped as an 8th grader singing the praises of To Kill a Mockingbird. ‘Racism is bad’…..yeah thanks for that. Not once did he mention President Trump. Way to step up to the plate. Silver medal goes to Mitch McConnell, who said nothing.

The biggest publicity stunt: All the these CEO’s leaving the Trump economic panel. What, they didn’t know Trump was like this? Did they not pay a lick of attention to anything he has said over the past 2-20 years? I love the way businessmen pay themselves on the back after doing such bold things like this. I am sure this move had more to do with morality than PR. Yeah….right. What a bunch of rats, just fleeing from a sinking ship.

The funniest moment: At the end, Trump started to plug his winery that he ‘owns’ in Charlottesville. He was saying it is one of the biggest wineries in all of American….and HE owns it. This was even less subtle than the time when Peyton Manning promoted Budweiser 3 times after Super Bowl 50. The level of brazen crassness is simply unbelievable, you just have to laugh.

The most revealing moment: The fact that these Neo-Nazi’s and KKK folk are NOT wearing hoods. Wow. At least back in the 1910’s there was some shame about this. Makes you think………………………