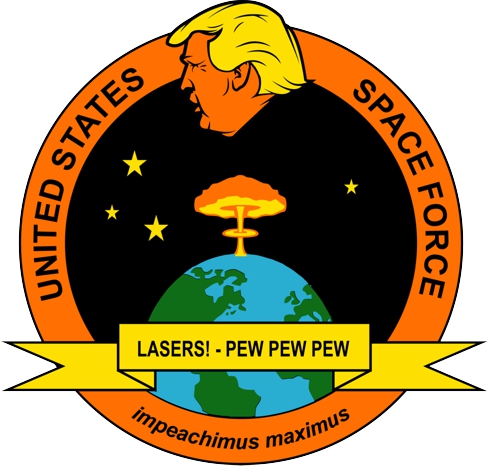 Trump has said some very stupid things in his presidency, mainly because he is such a stupid man.

But this one is the stupidest of them all.

Donald Trump wants to create a sixth military branch; a ‘force’ to fight people in space: the name………..Space Force.

First of all, this is the stupidest idea any president has ever had, and this includes such ideas as ‘separate but equal’ and ‘give tax breaks to rich people, they will then give money to poor people’.

Secondly, this is the stupidest idea in the history of the world. This includes such ideas as New Coke and woman’s hockey.

Thirdly, this is such an insanely stupid idea, I really can’t talk much more about it. But I’ll try.

I mean forget the cost of this. Forget the nuts and bolts of an endeavor like this. Even forget the complete unnecessarily of this. Think about this: Trump and his followers are the most anti-science people around. These are people who deny global warning, cut funding for all science-based institutes, clearly do not value scientific research or scientific truth, and doesn’t even believe in evolution. Why in the world are they interested in something that would require more scientific minds than any other government undertaking in history?

You want to know why? Well, other than the war-mongering minds of Mike Pence and company. The reason why is because people who don’t much about science think things like medical cures, inventions like iPhones, even space travel, are pretty easy to do. The complexities of these things are completely lost on these people. If you take a step back and think about electricity and how we integrated it in our lives, it should amaze you. Think about the internet; what the hell is going on there? I mean how does anything really and truly work? It is astounding.

But these simple minded people see Star Wars and think ‘Gee, why don’t we just make some of those and fight ISIS’. That is what we have right now in this country; simple minds who do not understand or appreciate the complexity of things…..even space travel. What is even scarier is that these same people are elected into office and do not think they don’t know.

Space Force all the way!!!