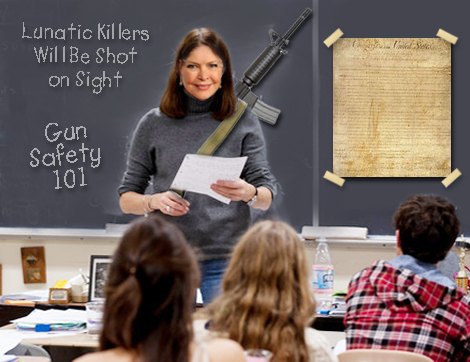 In an era of stupid ideas, one being stupider than the last, I think we finally hit the apex:

Donald Trump, in accordance with the NRA, now wants to arm teachers with guns.

OK, OK, I know he contoured the argument by saying only a few teachers should have guns, like one’s with past military experience and the like (as if military people are more stable folks….), but it remains the stupidest idea ever seriously proposed in politics.

First off, I always love the logic that the answer to gun violence is more guns. That is like thinking to prevent nuclear war, we make nuclear weapons more available to all countries so they police each other. I don’t see the US allowing that. More guns just mean more people get shot, either on purpose or on accident, every international statistic shows that.

Secondly, what teacher in the world wants a gun? What would this really look like? If an attacker comes, Mrs. Krabapple will tip over a desk, hide all the kids behind her, and start getting in a shootout? I swear people watch too many of these action movies; sorry Robocop is not a documentary (although I wish it was, love that film). The far more likely scenario is that the kid will steal the teacher’s gun as use it there. Hell, I had a hard enough time keeping track of all my calculators at the end of the day, and you think those kids would rather have a calculator than a gun? And if you ask any of my ex-students if they would want me with a gun…..well……I am sure all would say no to that. The only upside to this in my eyes is that this may get the kids to turn in more homework.

Finally, schools are so underfunded to begin with, who is the hell is going to pay for this? Teachers would need to be trained, have a gun bought for them, and then trust that they would know what to do in the time of crisis. Yeah, parents barely trust teachers as is; always complaining about their kid’s shitty grades, think they don’t know what they are doing, etc. And that is the teacher’s expertise! You think parents are going to like the idea of Mr. Craig packing heat?

This entire school shooting thing has been a great advertisement for the AR-15. I didn’t even know what one of these things was until now. I would bet there is a bump in sales this month for the old AR. Also these shooting is a great lobbying point for charter school champions; public schools are not safe, but these private schools with armed guards is way safer. Looks to me like these school shootings are great for the Republican agenda.

So yes, this idea of arming teachers is the stupidest idea ever; worse than Crystal Clear Pepsi. The world thinks we are insane, and they are right. And don’t believe for a second any sort of changes will be made legislatively. Yeah, it is fun to see all those kids protest to their local and national Congressmen about this, but none of this will make a dent in thing.

Such a sad thing to learn at such a young age; your voice means nothing in this country without having billions of dollars to back it up.