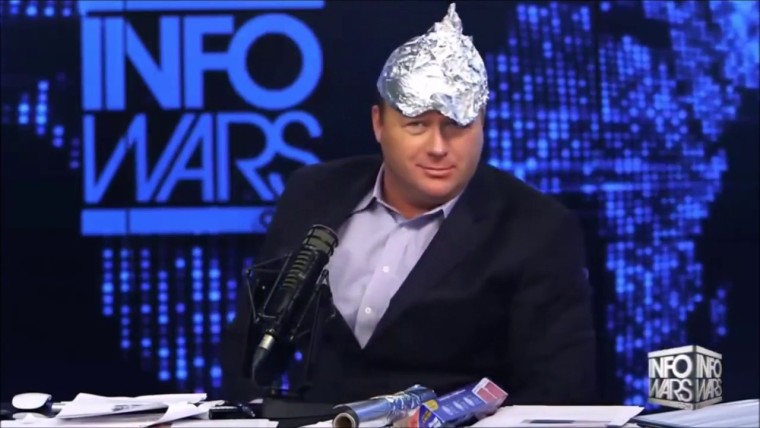 Want to see the face of a Trump supporter? Look at the picture above.

Yes, that is Alex Jones; king of Info Wars. If you don’t know what Info Wars is, well, let me explain.

Alex Jones is a conspiracy theorist and has a radio show called Info Wars. He also gives his audience the pleasure of viewing him on his website where he puts on a little vlog show.

So what are some of his theories……

OK, so this last one, Sandy Hook, has gotten him into some trouble. Six families from that tragedy, or gun control advocate set-up, are suing Alex Jones for defamation. Facebook has also banned his stuff from their site, saying that….well….it is just too stupid, even for Facebook.

Now all of this in a vacuum is not so harmless. Some of these claims are so silly (aka: Hillary Clinton is a lizard woman) that you have to scoff a bit. But here is the issue; some people buy what he is selling. And by buying, I mean buying the lot of it, warts and all.

On Breitbart, there are many readers who are not only defending his right to free speech, but calling him a patriot and saying he is the only one in the media telling the truth.

Let that sink in….the only one telling the truth out there. Now read some of those theories again.

So whether he has the right to say things that even he doesn’t believe just to incite a response is up for some debate (I personally say no, you don’t get to yell racial slurs at people then hide in the corner claiming protection due to the 1st Amendment, but whatever), the real issue here to me is that there are people that think he is a hero of sorts. Granted, not the majority of people, but enough for us to question a lot of things about our society.

How did it get to this? Electing a chronic liar/reality star to be PRESIDENT, people out there believing that Sandy Hook was staged, thinking that all immigrants are compromising our safety and economy, thinking vaccines for their children are actually killing off children, I mean where to end?

Again, the majority of people are not like this, but there are enough to sway the country’s politics in a way that is downright horrifying. How can you even reason with these people? Letting people believe in whatever they want maybe a right in this country, but do not think their thoughts have no consequence. Maybe it is time to rethink a lot of things in this country.