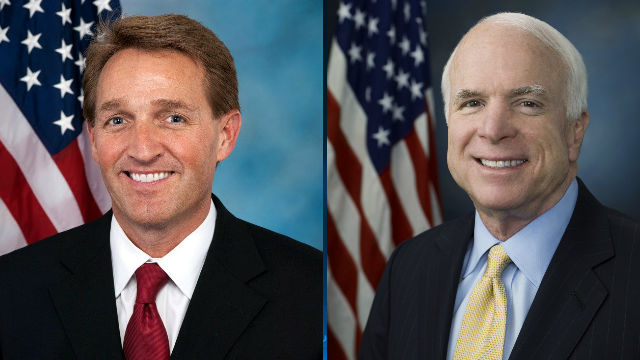 Arizona has had a very interesting history in terms of politics. I will not bore you with all the reasons why, my ‘required for a teaching cert’ Arizona Constitution class taught me this years ago, and I don’t want to spoil it for you. But Arizona has been a significant player in federal politics for years, moreso than you would think from a state with fewer people than Massachusetts.

So in some ways it comes as little surprise that the senators there are the ones piping up and calling attention to themselves on the national stage about the current president. But what makes this extremely unusual is the fact that these senators are calling out a Republican president.

Arizona is about as red as Toby Keith’s neck. It has been for decades, and will continue to be red. Sure, there are some blue faces in there like Bruce Babbitt and Janet Napolitano, but really the state is red. In fact state lines were drawn in the past sort of cementing this fact. So to see both John McCain and Jeff Flake come out so overtly against this Republican president is rather shocking and very refreshing.

Now don’t get me wrong here. McCain and Flake are not heroes of the Senate floor. Flake, a true ‘guns and God’ politician, ran a very negative campaign to win the vacated Jon Kyl seat a few years ago. Flake may appear to be amiable in interviews, but there is a strong ‘be a Christian or else’ streak in his body. And McCain, well don’t get me too riled up about that old man. A self-titled ‘Maverick’, the only time he voted against the best interest of the GOP was during this health care thing (which I may add, 2 other GOP women voted against, yet McCain is the one who received all the positive press about being so ‘brave’. Go figure that one out). Look at his voting record, about 90%+ down GOP party lines. A maverick? I think more like a rank-and-file type.

But you have to give out credit when credit it due. Flake honestly feels that the core values he believes in are being threatened by this monster in office, so he steps up and calls him out. That is honestly very cool and deserves a lot of respect for that. McCain, well it did take Trump to constantly call out his military record and manhood for him to act up. But he did step up as well. He, for the first time in his life, is acting the part of a maverick and not simply boasting about being one.

So where does that leave us? Well, Flake will vacate his Senate seat in 2018, leaving it wide open for the ultra-ghoulish Kelli Ward to gobble up. Yeah, maybe a Dem can sneak in there due to Ward’s extremist views on things, but never count on Arizona turning blue. So yeah, that doesn’t look so good come to think of it.

But what I ultimately hope is that these two acts of defiance will inspire other GOP senators to speak out and stand up for what is right. That maybe country is bigger than politics and it is time to be strong and not sniveling cowards who just want to keep their seat in office.

Yeah, I don’t see that happening either.