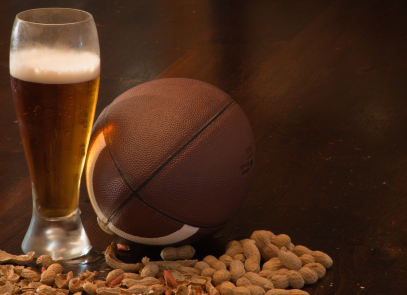 What goes better together than football and beer? The answer is nothing.

So apparently that was not a rhetorical question.

Anyway, how can I weave a particular type of beer into this football themed week? Well, what color is a football? Brown. What color is a Brown ale? Brown. You get it?

Well, let’s talk about Brown ale. First off note that the ‘B’ in ‘Brown’ is capitalized and the ‘a’ in ‘ale’ is not. Why? Well, this goes back to the London brewers of the last 17th century who were ill educated and did not know general capitalization rules. In fact, the first spelling iteration of Brown ale was ‘bRowN alE’, which looks completely retarded. Over the years and through countless compromises, we came to the current day spelling ‘Brown ale’.

So what is a Brown ale? Well, it is an ale that is maltier than most lighter ales (IE: IPAs or pales) and has a bit of a sweeter tone to it. They also are typically lower in alcohol content, which is not a bad thing. Brown ales are mostly brewed in the UK and the US; the UK typically are maltier and nuttier than the US counterparts and the US versions are a bit hoppier and citrusy than the UK version.

In other words, if it was genetically possible for a Porter and a Pale to have a bay, it would be a brown.

So here are five Brown ales.

Side Note: notice all the natural tie-ins to football as your read.

This is one of the most common Brown’s out there. It really is produced in mass by Heineken, but the origin is attributed to John Smith’s. This is a fair representation of an UK Brown; a good amount of malt and a fair sweet element to it. Newcastle is OK; a very generic beer than you may soon forget. Nothing stands out about this beer, it is like drinking malty water. Nothing like watching a football game, which is filled with excitement.

A very boring name for a very boring beer. So I guess it is apropos. Sierra Nevada makes good stuff, but this brown is just….well…brown. It seems to be modeling itself after Newcastle; being as brown in a brown world. Nothing about this brew motivates me to order it again, which is very different from football, where I am motivated to watch another game right after one is over.

Located in Mt Vernon (not George Washington’s version), this little microbrew specializes in the artsy-fartsy of the beer world. Many of their selections are barrel-aged, specialty type stuff. So this beer here is hard to find and costs a bit more. But wow, this is a special brown. 12% means it is very heavy, much like an offensive lineman, but it is balanced by a coconut flavored malt which is quite refreshing. By the way, coconut in dark beers is a very good thing. The flavor is nutty, the malt is sweet but not overpowering, and that monkey….well…that dude is creepy. But I say ‘Creep it up, Mr. Monkey. With beer like this, you can be as creepy as need be’.

Don’t worry, I really don’t say that. But it is a fine beer.

If you like sweet potatoes, that probably means we have different taste buds. I am no fan of the potato that claims to be sweet. So I was a bit skeptical before trying this offering from Breakside. And I can honestly say that I tasted no sweet potato in it. Of course I don’t taste any type of potato in any beer I have ever had. As a side note, say the word ‘potato’ 10 times in a row. What a weird word huh? P-o-t-a-t-o. I think it is the ‘po’ and ‘to’ parts that makes me giggle.

Anyway, it is a typical malt; but it tasted a bit sweeter than the Newcastle. I liked it. Didn’t love it. Sort of like punting on 4th and 3 at the 50, you can argue it both ways.

Evil Twin Brewery is an interesting story; it really isn’t a brewery. It is some guy who travels around America renting out different breweries to whip up some of his stuff. Apparently he went rogue from another craft beer outfit. Anyway, he seems like sort of a jerk. But a talented jerk because his stuff is almost always good. This brown has huge coffee overtones to it, which really compliments the malt well. It also has a strong smokey aftertaste, which some may not like, but I certainly did. This is quite a bit different brown than the other beers on this list, much like the American version of football compared to Europe’s lamer version. This beer deserves a swig if you see it in the beer aisle.